Thanks for Nothing, WEATHER! 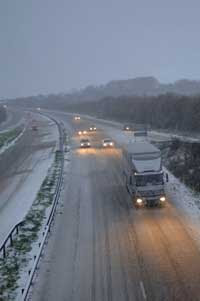 It’s 39 degrees and raining in Chicago today. According to the National Weather Service, it’s only 51 in ABQ right now – but it’s clear, and yesterday it was 71 degrees.

I’m staring out the windows right now, watching the exhaust of the cars curl through the bouncing rain, consumed by thoughts of my imminent drive to Wisconsin. Will it snow? Should I wait until morning to avoid the [soul] crush of traffic leaving the city, outsmarting not only the residents of Chicago but also the weather gods and suicidal deer sure to throw themselves in front of my truck on the way home? Should I pack a shovel and boots to dig myself out of the inevitable ditch?

Did I mention that it was seventy degrees in Albuquerque yesterday?

What am I doing here??

Funny story, but there was actually a time when I *missed* the Midwest. I whined about the lack of pretty fall colors (not many trees in NM, and the ones that are there mostly turn yellow), the lack of bracing fall weather, the lack of snow. The lack of snow! Was I insane? Last year at Thanksgiving, I stood outside on the patio and threw the ball for the dogs while I waited for my casseroles to cook. In a tee shirt. And no shoes. This morning, by contrast, I put on a sweater over my sweater, and then a coat, and a scarf, and isotoner gloves, and then stood outside in the freezing cold with rain pinging at my face while my bus took ten years to mosey on down to my stop.

Four years in New Mexico turned me into a major winter baby. My first winter there, I hardly wore a coat; by year four, I was complaining when the temperature dipped below sixty. I’d come home to Wisconsin for Christmas and refuse to leave the house unless the temperature went above zero. “One degree? Is that too much to ask?” I’d say, and all the hardy Midwesterners would laugh pityingly. “You think that’s bad? Last week it was negative one million, and the cellular structures in my eyeballs froze! And that was NOTHING compared to the winters of my childhood!”

I was raised by these people. I used to be one of these people. When I was a child, we literally had days off school because it was too cold, and they didn’t want kids to freeze to death waiting for the bus. (I also used to spend as much of the winter in the bathtub because I couldn’t get warm any other way, and I used to curl up in a corner of the bathroom to read because it was the smallest, warmest room of the house, and I used to stand outside near the dryer vent because it was slightly warmer than the rest of outside – but these things you forget, these things you gloss over, when you’re bragging about what a hardy Midwesterner you are.)

I also used to be able to drive in snow, but four years in New Mexico bred a pathological fear of driving in weather. When it snows in New Mexico, they chug out their one snow plow and try to clear the highways a little by dumping bloodred sand all over them. Then they send reporters to the far borders of the metropolitan areas to report breathlessly on all the white stuff! Falling from the sky! The reporters interview this one old guy who owns the Citron in Cedar Crest, and he says he’s never seen it snow quite like this before. Then seventeen semitrucks fly off the highways because they don’t know how to drive in snow. Then they close the highways.

In the four years I lived in New Mexico, they closed I-40 at least ten times, sometimes all the way to the Texas border. Good news: every time it snowed, I had days – sometimes weeks – off school. Bad news: I came dangerously close to getting stuck in Moriarty a few times, at which point I would turn into Joan Crawford and demand that R. drive through the blizzard to rescue me. On the days they predicted snow, I would stare at the Sandias with dread, wondering just how much the heavy clouds were dumping on my commute. (Another thing I miss about NM: being able to see what the weather is like twenty miles away.) My puny truck could barely make it up the mountain when the road was dry; in the snow, it was a nightmare. Worse, people in the Southwest generally do not know how to drive in winter weather. In the Midwest, everyone has one day of amnesia where they have to re-learn how to drive in the snow. In the Southwest, snow-amnesia is every day. And the stakes are much higher: here if you go off the road, you land in a pillow-soft cornfield. There, you land in an ice canyon of death.

Of course, I didn’t move back to the Midwest because I missed the gray skies and gray streets and long sunless stretch between November and March. I didn’t miss the sub-zero temperatures or freezing rain or bitter winter wind. I was totally fine without the suicidal deer so tired of the Wisconsin weather they’d rather fling themselves into oncoming traffic than face another day in this bleak winter.

I moved back because my family is here, and for that reason, it’s unquestionably home.

This will be my first Thanksgiving with family in five years, and for that I’ll gladly fight snow and traffic and rampaging deer. I’ll face cold and gray and miserable. I won’t flinch when it starts snowing. I won’t even complain… too much.

I’ll hit the road early, because waiting at the end of it is my family. And for that, I am truly thankful.

Granted, it's only a light dusting, but still... snow. On the ground.

As a New Mexican, I think this post is really funny.


Unfortunately I think my new life in southern Florida means I will now find new Mexico winters to be treacherous. Oh dear.