Gabrielle Zevin's Elsewhere and Memoirs of a Teenage Amnesiac

I picked up Gabrielle Zevin’s book Elsewhere over the summer on a day when I was feeling vaguely sorry for myself and conveniently happened to end up at a bookstore in the Loop. I remember thinking that the book seemed familiar, and I also remember that there was this very intense little kid staring at me 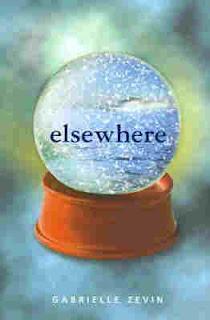 as I browsed in the YA section, which made me feel both uncomfortably tall and awkwardly out of place, like I was somehow impinging on the territory of The Little. So I grabbed the book and hurried off to the checkout, where nobody made me feel anything but seven bucks poorer.

It started to rain as I walked from the train to my apartment, and I ducked into my favorite café to wait it out. After I’d settled in with a latte and Elsewhere, it actually started to hail outside, but by then I didn’t care about the outside world. I was hooked.

Elsewhere invites comparison to Alice Sebold’s The Lovely Bones, as both are told from the perspective of dead teenaged girls. However, while the narrator ofThe Lovely Bones focuses her narrative on what’s happening in the world she left behind, Elsewhere’s protagonist, Liz, must learn to live in a new world. In Elsewhere, you keep the identity you had on Earth and get a second act, of sorts, in which you pick an avocation and live exactly the number of years you did on Earth, only backward. Liz must come to terms with the fact that not only did she only get fifteen years on Earth, but also she’ll never get any older in Elsewhere – in fact, she starts getting younger the moment she arrives. It’s the coming-of-age tale of a person who will never get to come of age.

Elsewhere has an unusual tone, a distance in the narrative, that evokes modern fairy tales like St. Exupery’s The Little Prince and Coelho’s The Alchemist. With its intriguing premise and simple language, it is a charming little book. Major bonus points for a prologue told by a pug and a protagonist who can speak Canine.

“Hey girl,” Liz says to the dog, “you don’t have to drink from there.”
The dog looks up at her. After a moment, the dog cocks her head curiously and speaks. “Isn’t that what it’s for?” she asks. “Why else would they fill a low basin thingy with water? You can even get fresh water by pressing this little handle, right?” The dog demonstrates, flushing the toilet with her left paw.
“No,” says Liz gently, “it’s actually a toilet.”

Zevin’s second YA book, Memoirs of a Teenage Amnesiac, like Elsewhere, is told in three parts. And, like Liz, Naomi Porter loses her footing, and must decide what she wants her life to be. After she falls down the steps 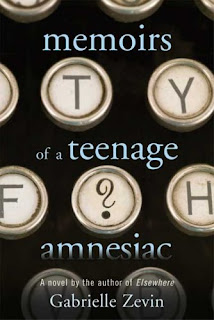 of her high school a few weeks before her junior year, Naomi experiences a rare form of amnesia that blocks the last four years. She doesn’t remember that her parents are divorced. She doesn’t remember her boyfriend, her best friend, or why she liked yearbook. After the accident, she must rediscover her own life, and decide whether to follow the path she’s laid out for herself, or to forge a new one.

Of course, this premise is compelling. If you could, would you choose the life you have? Would you be the person you are? This form of amnesia may not even exist in real life, but the questions it poses makes it rich territory for novelists and soap opera writers.

Memoirs is told in three parts: I was, I am, and I will. I must confess that some of this novel’s appeal – for me, at least – lies in the third part, I will, which was just as satisfying to my girlish teenage heart as the moment when Anne Shirley and Gilbert Blythe finally smooch. For this reason alone, I know that if Memoirs of a Teenage Amnesiac had been around when I was a teenager, I would have returned to it again and again to restore my (girlish teenage) faith in the world.

I didn’t trip or all – tripping and falling are accidents.
I dove – diving is intentional. Idiotic, yes, but also intentional.
Diving is a leap of faith plus gravity.
I had been throwing myself toward something.
Maybe away from something else….

I really liked Elsewhere. I've had Memoirs sitting on my shelf for awhile and keep meaning to read it... I need to get around to that...

Wow, This book is amazing...Im not really into the falling into love books, but i have to say that this may be the best book i have ever read. If you havnt read it READ IT!