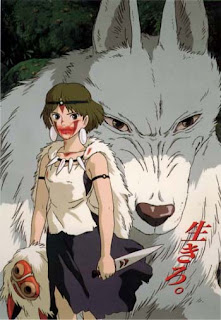 Last night, we watched Hayao Miyazaki’s film Mononoke-hime, or Princess Mononoke, which – according to Wikipedia, at least -- is the third most popular anime film in Japan, after Spirited Away and Howl’s Moving Castle. For good reason. Princess Mononoke is beautifully animated and presents a tale of complex moralities in the struggle between the Humans and the Forest. Like Harry and Voldemort, it seems, neither shall live while the other survives. Only Prince Ashitaka, an exile from a long-lost tribe, understands the need to make peace between the two groups.

I have a deep-rooted (and totally irrational, I know) distaste for anime, which stems from this show Belle and Sebastian that was on Nickelodeon in the late 80s. I hated that show, and I’m not sure why. It’s about a little boy and his giant dog (a Great Pyrenees, probably) who live in the French Pyrenees – yes, the central plot focused on a dog, and still Young Molly could not love it. It was the weirdly moving mouths and eyes and the occasionally poorly-synced sound that bothered me. Also, as I recall, the kids were always climbing mountains and freaking out about something or other, and whenever they freaked out about something, their mouths opened and shut like lampreys. I hated that.

So the very fact that Princess Mononoke won me over says a lot for it; it’s good enough to charm an ardent anime disliker. What I loved especially about the film -- other than the gorgeous animation and the extremely charming character Yakul the red elk – was the complexity of the characters. No one (other than Yakul) is all good or all bad. Lady Eboshi (voiced in the English version by Minnie Driver) is the leader of the Human settlement Irontown, and though she thinks it would be a fantastic idea to kill all the animals in the Forest and cut off the head of the Forest Spirit, she also takes in lepers and buys the freedom of girls in brothels. Moro the wolf goddess (voiced by Gillian Anderson) wants to eat Lady Eboshi’s head and generally thinks that Humans should probably all be drowned like kittens, but she also takes in a human girl and raises her as a daughter, and will do anything to protect the Forest. It’s never easy.

The only part of the movie that gave me pause was the ending. Billy Bob Thornton and Minnie Driver manage to cut the head off the Forest Spirit, causing it to turn into a giant black ooze that searches the forest for its head and turns everything it touches evil or dead. Suddenly, the fight to stay clear of the black ooze becomes a matter of life or death. “Don’t let the ooze touch you!” people scream, running from its inevitable path.

The scene would have been very dramatic, probably, if it hadn’t reminded me of another animated movie: My Little Pony: The Movie. 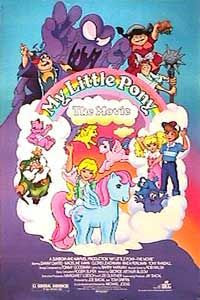 That’s right, Miyazaki’s lovely, classic film reminded me of a wretched example of cinematic prostitution existing only to sell more toy ponies, one which to this day is on record for being one of the weakest grossing feature films ever.

My film studies major sister will probably have a coronary at this comparison. Miyazaki… and Hasbro? Seriously?

Yes, seriously, and Megan, here’s why: I know you remember My Little Pony: The Movie, because we definitely rented it from Mr. Eddy’s video store more than once. Perhaps you recall the plot, which involves an evil witch making a PURPLE OOZE which covers PonyLand and which turns everything it touches grumpy and pessimistic. Miyazaki = Black Ooze, turns you evil; My Little Pony = Purple Ooze, turns you cranky. Just as the final scenes of Princess Mononoke have everyone running away from the Black Ooze, much of My Little Pony: The Movie involves ponies, dragons, flutter ponies, and some human kids (notably named Megan and Molly, which may explain why my sister and I watched that movie more than once) running away from the Purple Ooze. The Black Ooze destroys the Forest and Irontown; the Purple Ooze destroys PonyLand and the Dream Castle. The Black Ooze disappears when Ashitaka and San give the Forest Spirit’s head back to him; the Purple Ooze disappears when the Flutter Ponies come do “Utter Flutter” and free the Rainbow of Light, which attacks the witches who made the Purple Ooze and drops them in a volcano. Okay, so the denouement isn’t quite the same, but still. The Oozes and their effects are eerily similar.

After watching Princess Mononoke, I’m eager to see Miyazaki’s most popular film Spirited Away, which I actually promised Lisa I’d see years ago. I’d probably even see Howl’s Moving Castle, I was that enchanted by Miyazaki’s work. Still, you’ll be hard-pressed to convince me that Hayao wasn’t watching My Little Pony: The Movie with his grandchildren when he worked on the script for Princess Mononoke. I guess I’ll hold my judgment here, but if Spirited Away ends with Utter Flutter freeing the Rainbow of Light... well, Hayao Miyazaki, I got your number, and I’ll count it in tiny purple hoofbeats.

The purple ooze? Yeah, it's actually called "Schmooze." I totally watched that movie. Over and over and over.

I highly recommend Spirited Away . It's got lots of ooze, but doesn't END with ooze. My 8-year-old niece requested a "Bratz" movie for Christmas this year - we refused, and bought her Spirited Away instead. She loved it, and I get cool points to put in my Cool Aunt piggybank.

you MUST see Spirited Away. So imaginative. so good.
And Howl's Moving Castle ROCKS.

For your information, that My Little Pony movie was instrumental in my future love of the cinema. Also, I do not doubt that many film auteurs have been inspired by that animated pony movie.

I saw Howl's Moving Castle in the theatre, and I just watched Spirited Away for the first time a few weeks ago. Both were fantastic (though I'd caveat that the later wraps up a bit too pat-ly for my taste, if that makes sense... which it probably doesn't if you haven't seen them. Anyway.)

I have the exact same childhood distaste for anime because of the way the characters looked when they cried.

Molly, my love, as a fan of "The My Little Pony Movie" I feel compelled to point out that the substance Hydia and her daughters conjure is, in fact, called SMOOZE.

Nora my dear, the fact that you watched My Little Pony: The Movie makes me love you a little more, if that's possible.

Heather, of course you're the coolest aunt ever.

Kristen's right, it is Smooze. I have to say that your reference to Hydia is a little over the top. That is some intense pony love.

And Megan, I'm glad to hear that our childhood was as inspiring to you as it was to me. I know that I have written many a poem about Castle Greyskull, and my first novel was loosely based on our childhood favorite "Who's That Girl," panthers and all.

Actually, I'd recommend you check out all of Miyazaki's movies, not just Spirited Away and Howl's Moving Castle. Because I am a nerd, I have actually already blogged about the common themes that show up in Miyazaki movies. In any case, the one that I think will appeal most to you is the way pretty much all his movies feature a young, usually adolescent, girl going through a coming of age event and proving herself to be awesome.