In high school, we used to play this game called the Stick Game, which went like this: So, I'm holding this stick, see, and I'm thinking of a word. And you have to guess the word I'm thinking, and if you guess wrong, I get to hit you with the stick. Now, I know what you're thinking: that's just TOO easy, right? So to shake things up a bit, I can change the word at any time....

In retrospect, it's amazing that we played this game as much as we did.

I started thinking about this game again when I decided to do National Novel Writing Month this year. I've done it a few times before, once - and most notably - with a bunch of middle schoolers, and I know exactly how hard it is to write 50,000 words in a month.

But I decided to do it anyway. Why not, I thought. I need a break from my current work in progress, and I could use a few weeks of crazy intense marathon writing.

So a week or so ago, a good friend of mine offered to pledge $2/thousand words to a charity of my choice.

Shoot, I thought. That means I actually have to take myself seriously.

About five minutes later, another friend jumped on the wagon. And then another. Suddenly I was up to $5/thousand words, and I hadn't even chosen a charity yet.

So, okay. I guess I was doing it. For real. I was going to write a NaNo novel for charity.

Even though it would probably be more thematically appropriate to use NaNoWriMo to raise money and awareness for a writing and/or literacy charity (for example, the excellent Open Books), I decided instead -- for this year at least -- to write for the greyhounds. 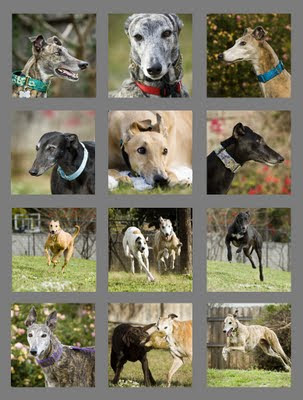 Greyhounds Only is the organization through which we adopted Zia. For each dog that goes through the Greyhounds Only adoption program, GO pays an average cost of $761. Every contribution helps a greyhound on his or her journey from the racetrack or farm to a forever home. Part of their mission is to deliver medical care to as many greyhounds as possible so that they will not be put to sleep and can be placed in permanent homes. GO pays for medical costs for all dogs that go to the kennel prior to their permanent placements. Most of the dogs only require routine care; however, they also receive dogs with racing injuries (like Zia), for which they absorb the cost.

If you'd like to pledge me for the month, drop me an email & I'll add you to the list.

I'll be writing for the whole month of November, so you can pledge anytime!

Wish me luck... and if you see me between now and December, tell me to get back to writing!
1 comment: