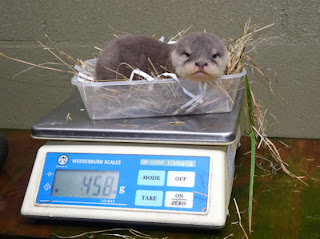 1. If you're halfway through your story & your plot is grinding to a halt, maybe you need to re-think your character's wants & needs. Or maybe you're just generally sort of interested in things I write. Either way, check out my article in the latest issue of The Prairie Wind.

2. If you've read Eleanor Brown's The Weird Sisters or Elizabeth Stuckey-French's The Revenge of the Radioactive Lady (or both!), or if you're just generally interested in things I do, you should come out to Printers Row on Saturday, June 4, and hear me attempt to ask them enough semi-intelligent questions to get a good conversation going. With authors like these, I don't think I'll have to work too hard!

3. Baby otters! That is all.
No comments:

Among several modest talents, one of which I am particularly proud is my general competence at not killing things. I might even go so far as to call it a gift. There are tons of things I haven't killed. Middle schoolers, for one. That I managed to teach 7th and 8th grade for years without killing a single child is pretty impressive, if I may toot my own horn. I've had probably close to a hundred co-workers in the last decade and a half, and I didn't kill a single one. Family members! That's a big one.... and birds! The world is full of birds I haven't killed.

You see? Plus -- and I don't want to brag or anything here, but really -- it's not even hard for me. Not killing things actually comes quite easily to me. I know.

In the last ten or so years, I have taken my gift to the next level, and begun to work on keeping things alive. I started with one jade plant, a gift from a student. Not only is it not dead, but it's thriving, and has propagated many smaller jade plants. Then a Norfolk Island Pine from my dad -- still alive. A Christmas cactus from same? Also still alive, though it's currently on a time out in the closet. Then pothos and schefflera, a money tree, a goldfish plant. Natalie started bringing plants home for me to not-kill -- an aloe, a spider plant.

(Not to mention the greyhound! She's been living with us for almost two years now, and I would like to take at least partial credit for keeping her alive all this time.)

So this year I'm attempting to take my talent to the next level, and not-kill plants outside. 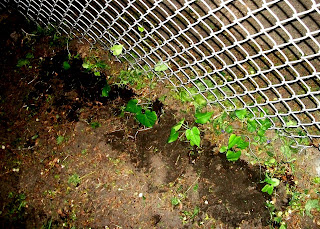 We have a fairly giant yard for the middle of the city, and for the last two years we have been talking about making it nicer. Instead, we opted to let the greyhound race back and forth and dig holes and generally destroy what little grass there was.

But this year! This year is the year that we take back the yard! 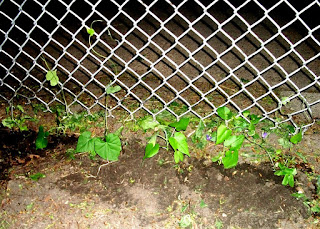 In March, I got a bunch of bulbs and roots from my father, who apparently had gotten them at Costco. A few weeks later, we planted four peony bulbs in our front yard, and to this day they are still alive. Success!

Around the same time -- early April -- I bought a packet of morning glory seeds from the hardware store down the street, and planted them in adorable little seedling cups. They managed to sprout about three days before we left town for a week, and I think I freaked out our friends who were going to watch Zia when, in addition to the greyhound, I showed up with two flats of tiny seedlings and a spray bottle, and demanded politely requested they keep the tiny seedlings in the sun and maybe even water them from time to time. 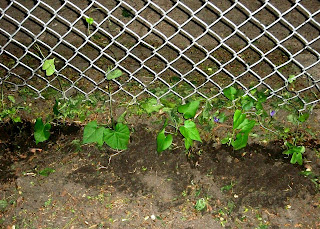 That fence is just begging to be climbed

Fast-forward a month. Most of the tiny seedlings have grown into smallish plants with long creepy vines they whip around like lassos, looking for something to climb. They've been hanging out in my office and I keep having to separate them, because they keep wrapping their little limbs around each other like eighth grade girls. 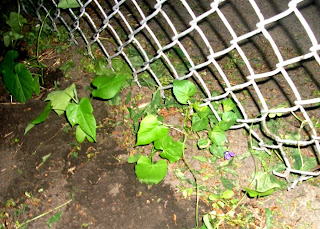 Today I'd finally had enough of constantly separating their little vines and moving them around on the desk. All right, vines, I said. Time to go outside. 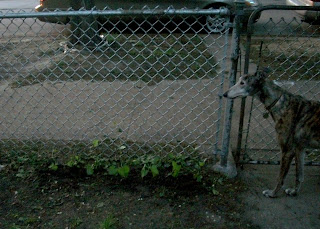 While I was outside, I decided to finally throw the rest of the plants from my dad in the ground. They'd been in bags in the closet and weren't particularly happy. I have no idea if they'll live. I actually don't even know what kinds of plants they are, beyond "not peonies." 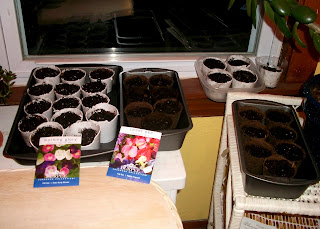 Meanwhile, in the house, there are a bunch more flats of potential seedlings -- morning glories and sweet peas. Normally I wouldn't start seedlings this late, but since it's approximately March outside, I figure it might just be starting to feel summery in a month or so, and I can drop the rest of the climbers in the ground then.

I can't wait to not-kill them.
No comments: