Me: No, she's actually a purebred. EGIS: Pomeranian? Is that right? 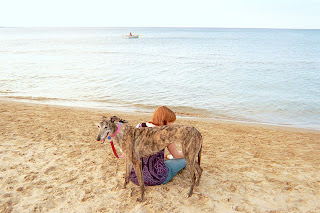 Zia: Not tiny. Also not fluffy.

EGIS: I've never seen a greyhound that looks like that before! 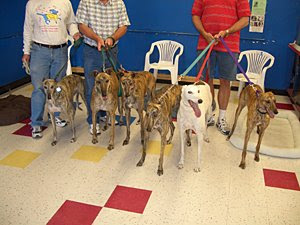 A bunch of brindle greyhounds: look exactly like Zia.

I wanted to say: Hmmm, well, that's what they look like.
or: So actually, you've never seen a greyhound before.
or: A pomeranian? A POMERANIAN?? HA HA HA HA HA!
or: Please stop talking.

Questions Zia Has Refused to Answer

First of all, she is absolutely beautiful. She has gorgeous liquid brown eyes, deep amber in sunlight (just like Zeke's were, when I first met him), and lovely black lining around her eyes. 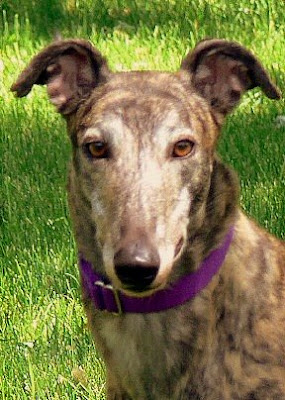 Her fur is striped like a tiger, and she can camouflage into our living room rug pretty tidily. She folds her paws daintily when she rests, and has a very pretty prancing trot when she walks. At different times she looks like a fawn, a horse, a giraffe (it's the neck), a wolf, and some sort of swimming creature, possibly a mermaid. She has a sleek, waving way of moving through the air like it's made of sea. And of course, she always looks like a queen. Last night we had people over and Zia held court from our bed, letting people come in and admire her and pet her without deigning to join the sweaty masses.

She's not like any dog I've ever known. She prefers inside to outside, to the point that we sometimes have to fight her to get her in the backyard to go potty. Even stranger, she loves going for walks; she just hates going into the backyard without a leash on. She doesn't know how to play, doesn't have much of a prey drive, and spends most of her time snoozing. She sleeps a lot.

She's very shy but not really anxious; she won't approach you but she also won't pee in fear or bolt when approached by strangers. She's very patient when little kids hit her and when puppies jump on her. She stood absolutely still when I wanted to clean her ears with q-tips, but was not down with the tooth brushing. Her passive resistance rivals Gandhi's. She's very polite about it, but if she doesn't want to do something, she won't.

Her fur is soft like a bunny's. She likes to be scratched on the neck, right behind her ears. Sometimes when she's sleeping you can see her bottom teeth. She really likes hot dogs but in general is the least food-motivated dog I've ever met. I have a hunch that any time spent with Grandma will change this. She is careful to take every single step going down, but is very nervous to do stairs in the dark. She already feels completely at home at StoryStudio, where she has a big poufy bed to sleep on, right next to my desk.

Sometimes, in the middle of the night, we'll wake up to find her lying on her back with all four legs in the air, completely dead to the world.

The end of her tail has a little tuft of black hair, like a lion's tail, or an elephant's. She has a matching pink collar and leash, but strangers still call her "he," probably because she weighs 65 pounds of pure muscle and her head comes nearly to my waist. She likes to look out the front window, especially when N leaves for work. We both go to the front window then, and watch until she's out of sight.

She's a tidy eater and a sloppy drinker. Her nose drips when she's nervous. She's not particularly interested in toys, but sometimes I come home from work to find her curled up with a stuffed bunny in her crate. She puts herself to bed between 8 and 9 pm, and if we're still up she'll come into the hallway every half hour or so as if to ask, "Um, are you guys coming to bed, or what? Because it's bedtime."

She's sleeping in my bed right now, stretched out with her head resting delicately on N's legs, waiting for me to stretch out alongside her and run my hand along her long, soft neck, until we both fall asleep.
No comments: