When I was six years old, I stepped on a nest of yellow jackets. We had stopped on the side of the road to pee off the side of the car, par for the course on family roadtrips, and then my dad, little sister, and I wandered a little ways into the woods where we found an abandoned train track and decided to explore it. I was first. I remember the before and the after: first the woods, hazy and green, dappled light filtered through leaves, and then the pain.

We were somewhere along the Blue Ridge Parkway in the Appalachian Mountains. Beautiful and remote. I stepped on the nest and suddenly I was surrounded by angry wasps. They were ferocious and unrelenting. I remember my dad yelling for me to run, but his voice came through a veil that panic had thrown between me and the rest of the world. On the other side of the veil, my dad yelled "Run! Run!" On my side, the wasps buzzed in my ears and my feet stayed frozen in place. 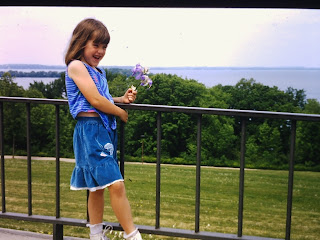 Eventually my dad caught up to me and grabbed me under his arm, a frozen girl statue, and carried me out of the woods back to our little blue super beetle. I had been stung 13 or 14 times. My dad had 8 stings and my little sister had 3 or 4. My parents had no idea whether my sister and I might be allergic to stings. Our first aid kit was what we had in the car: I held cold cans of beer from the cooler against my hot skin as my parents frantically tried to find a Ranger's Station.

Anyway, last night I startled a bunch of yellow jackets while I was cutting down burdock growing against the fence. One of them stung me, fast and hard, right on the wrist bone. There was no buzzing, no veil, no moment where time turned to honey, viscous and glowing. There was just this tiny F16 on a mission and a sudden shock of pain. And then there was me, yelling expletives at yellow jackets until it occurred to me to rescue myself. I went inside, washed my whole arm and hand with soap, took an antihistamine, and kept it on ice for the rest of the night.

There is something I appreciate about physical ailments: I like how they bring me back to my body. I like how they put my brain in its place. They remind me that no matter how smart I think I am, I am not in control of the universe, because I live inside a body that is subject to illness and injury. It keeps me humble.

But I don't appreciate this one. You guys, it HURT. It ached like muscles do after you get a shot. Last time I got a TDAP booster, my arm ached for two days. This was worse. I spent half the night googling additional remedies, but came up empty handed. Today, the ache has lessened, but the area around the sting is swollen and itchy and hot. I'm grumpy about it. I just want to complain.

Finally I texted my mom for advice. "This one sting hurts so much! How did I not die when I was little?"

She wrote back, "I gave you Benadryl and Advil right away and put a cold can immediately on the sting sites. Then I cuddled you until you felt better."

I think of the little girl who was me, sitting in the back of a hot car, scared, surprised, holding cold beer cans to her 13 stings. Another girl might never have gone back to the woods. Another girl might have developed a lifelong phobia of bees. But the little girl who was me didn't let the possibility of getting hurt again keep her away from the world. She went on exploring. She kept loving the woods. She stayed brave and curious. She stayed open to a world that could hurt her at any moment.

But I am still that girl. I go on loving the world.
No comments: