Ferdinand the Bull and the Power of Stories 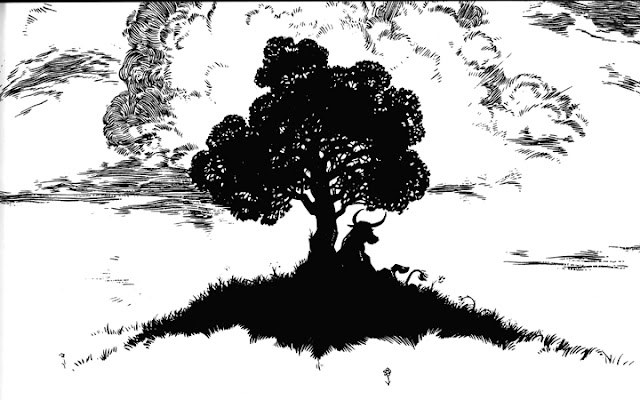 In the picture book class I'm teaching, I asked my students to bring in books to share so that we could get a broader range of texts to discuss. One woman brought in The Story of Ferdinand by Munro Leaf, illustrated by Robert Lawson. My students are all much older than me (you have to be at least 50 to take the class, and a few of them are in their 80s), but we all had good memories of reading this simple story about a little bull who would rather smell the flowers than fight.
The Story of Ferdinand was published by Viking in September, 1936, to little fanfare. Early in 1937, though, sales began to grow weekly, and by 1938 this little book for children was outselling the enormously popular Gone With the Wind. The book's message of individuality, independence, and peace resonated with people across the globe.
Not everyone loved it, however. The Spanish dictator Francisco Franco was so threatened by its peaceful message that he banned it in Spain as long as he held power. After his death in 1975, copies of the book were seen as symbols that Spain was finally free.
Adolf Hitler also felt threatened by the little bull. He called the book "degenerate democratic propaganda" and ordered that all copies be destroyed. At the end of WWII, 30,000 copies of the book were printed and freely distributed among German children as a message of peace.
The women in my class are writing all kinds of stories for children. Today I heard stories about mysterious noises, first bus rides, learning the constellations, the National Parks, houses for mouses, baobab trees, new friends, and the food web. I loved them all.
At the end of class, we got into a discussion of current events. Many of the women are retired teachers or librarians, and like me, they are worried, upset, angry, disgusted, depressed, and overwhelmed by recent attacks on education, health care, the environment, the arts, science, immigrants, Muslims, and free speech (and that's just the list of things we talked about), both here in Iowa and on the national level. Some of them told me that they feel helpless and hopeless. Some of them told me they want to fight. Others said they wanted to help, but they didn't know how.
Ladies, I can relate.
I told them that these days I end my college classes by reminding my undergrads to be kind to each other. I told them that the drafts they shared in class today inspired and cheered me. I thanked them for sharing, and told them that this class is the highlight of my week. And then I reminded them that something as simple as a children's picture book about a funny little bull could be powerful enough to threaten dictators.
Stories matter. Art matters. Your voice matters.
Keep creating, my friends, and remember to be kind to each other.