It's Not a Perfect Metaphor

Remember that movie Paddle to the Sea? You probably saw it in like third grade on a day when your teacher had a migraine and didn't want to explain the difference between a cursive capital Q and the number 2 for the seven thousandth time. In the film, a sick-but-winsome kid carves a canoe with an Indian guy in it and then drops him in the snow, hoping that one day he'll make it to the ocean, because as everyone knows, every drop of snow that falls in Canada eventually makes it to the sea. 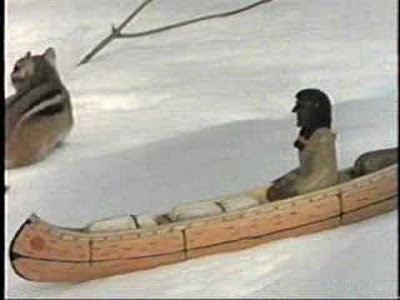 Hey chipmunk, can you give me a push?

It occurs to me now that when I was a kid, I thought of the Indian-dude-plus-boat as a kind of Native American centaur. Not in a mystical way, like the Indian is one with his canoe!, but literally like he didn't have legs.

Also? Witness the cruel irony of his name. Paddle-to-the-Sea HAS NO PADDLES. He can't even move his arms! Damn you, sick winsome kid! 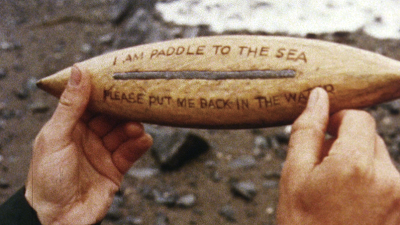 I am a victim of my own name.
Please put me in your fireplace so I can not-paddle no more forever.

Eventually, Paddle make it to the ocean -- I just looked it up, and apparently he actually travels through all five Great Lakes and then up the Saint Lawrence Seaway to the Northern Atlantic! For some reason, I'd been imagining him traveling down the Mississippi, and for some reason that seems more credible somehow? Like really dude, I'm supposed to believe you made it through ALL FIVE Great Lakes AND through the multitude of locks, canals, and channels to go UP the Saint Lawrence all the way to Quebec? WITHOUT EVER PADDLING??

Anyway, he makes it to the ocean, I guess, and has to contend with some giant merchant ships, who, if they had Thomas the Tank Engine faces, would be having some hilarious reactions to the tiny wooden Paddle-who-can't-paddle, but which in reality basically just run him down. 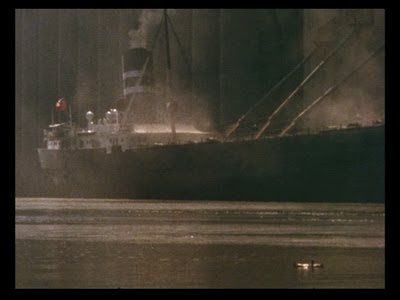 Paddle makes it to the Sea! And it kind of sucks!

Finally, Paddle makes his way to the Lighthouse which apparently was his destination all along, even though you might notice that his name is not Paddle-to-the-Lighthouse. But whatever, Paddle, it's cool. You're tired, it's cold out there, you've been not-paddling a long time. We get it. The lighthouse keeper takes Paddle in, dries him off, paints his face back on, and thinks about keeping him all safe and warm in the lighthouse until he sees, carved on the underside of Paddle's legsboat, the wretched curse that will haunt Paddle to the end of his days, or until a whale finally eats him: Please throw me back in the water. So the lighthouse keeper takes him out to the cliff and unceremoniously chucks him back into the ocean. THE END.

I don't remember if we're supposed to learn any lessons in the process. Probably. Something about grit and gumption and how even if you're paralyzed and have a boat for legs, you can still achieve your dreams.

...Anyway, this post was actually supposed to be about revision, but as I think about it, Paddle to the Sea isn't really the amazing metaphor I thought it would be going into it.

Nevertheless, I'm pretty close to the day when I'll literally never have to revise this book again, and that feels pretty awesome. I owe a huge, huge, enormous debt of thanks to my editor, who keeps pulling me out of the water and painting my face back on.

And here is my lighthouse: 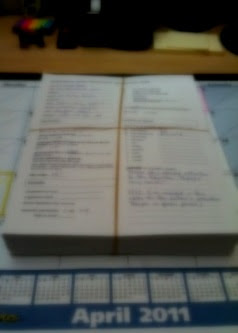 My book! On its way to the copy editor!

Even sweeter than making it to the sea.
3 comments: