Sea Turtles, An Ocean Full of Garbage, and Us 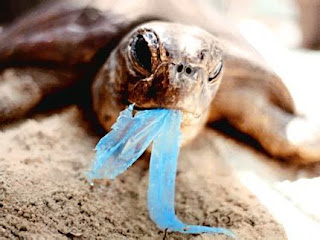 Ever since I saw an article about how one-third of sea turtles have plastic in their digestive systems, I've been eschewing plastic bags at stores. I've felt gross about plastic bags ever since I first learned about the Great Pacific Garbage Patch last summer, but for whatever reason, the article about sea turtles really pushed me over the edge. I guess the sea turtles put a face on the problem? Like before, it was "Oh my god, gross, there's a floating island of garbage the size of Texas in the middle of the Pacific ocean, ugh, humans are awful." And now it's "SEA TURTLES! They just want to eat some jelly fish! STOP DUMPING PLASTIC IN THEIR OCEANS!"

When I think about sea turtles, I always think about my favorite Roald Dahl book, The Wonderful Story of Henry Sugar and Six More, which has a story about a boy who befriends a sea turtle. Maybe I wish I were that boy, whispering to sea turtles, riding them out into the waves, disappearing into the blue horizon. Notice how this story doesn't include a part where the magical sea turtle eats a Walgreens bag and dies?

Also, sea turtles remind me of Zeke. They're just these peaceful monsters with crappy eyesight who live to eat yummy food. In his later years, Zeke would sometimes appear like Jaws and slowly shark down on your hand, hoping it was full of food (or maybe hoping you suddenly had steaks for hands). I imagine sea turtles the same way: coming across a floating plastic bag, thinking "ooh, jellyfish!" and chomping down. (Jellyfish, by the way, are bastards. I am strongly in favor of anyone who wants to eat them.)

Anyway, so I'm done with plastic bags. And I encourage you to be as well. This morning I stopped at Walgreens to pick some things up and because I couldn't fit it all in my purse, I bought a $0.99 cloth bag to carry everything. The lady at the counter asked me if I wanted to bag everything in plastic before putting it into the cloth bag, and I looked at her with horror. What? NO! Are you on crack, lady? Do you not understand the point of a cloth bag?

Last week I told someone at the grocery store that he could keep his plastic bag. "They kill sea turtles!" I said. He looked... politely interested, maybe? Bored? Worried I'd jump across the counter and strangle him? I'm not sure. "There's a floating island the size of Texas in the middle of the Pacific ocean, and it's made almost entirely of plastic!" I said. "I did not know that," he said, channeling the guy from Wayne's World. I'm sure he didn't actually care. But I do.
1 comment: