So it's Saturday afternoon and I'm doing laundry while N's at the theater. In a former life, I used to wait until Kate & Alley was on so I could fold my laundry to the comfortingly mild hijinks of Jane Curtin and Susan Saint-James, but lacking a TV, I have more control over what crappy TV I get to watch while I'm folding towels.

Okay Hulu, I say, gimme your best shot.
Yeah? Asks Hulu.
Yeah, I say.
And Hulu says, How about SHE-RA, PRINCESS OF POWER?

SHUT THE FRONT DOOR, HULU. You have to understand, in a childhood of very little TV -- I remember a lot of getting lost in cornfields, building bridges across cowponds with sticks, lining rocks up in order of prettiest to ugliest -- we chose to spend our allotted TV hour on two shows: He-Man and She-Ra. My favorite episodes, of course, were when He-Man and She-Ra COMBINED FORCES to save the universe from evil, similar to when Jamie and Paul Buchman would suddenly show up in Central Perk and mistake Phoebe for her evil twin Ursula. Oh, the hilarity!

So yes. I sat down with my clean, warm laundry to watch the pilot episode of She-Ra, Princess of Power. And it was awesome.


And so, so, so much gayer than I remembered. 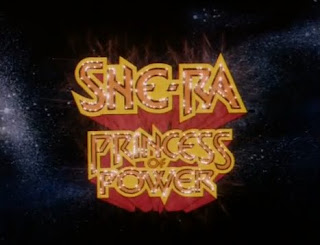 The credits are like Electric Company plus GLITTER plus power 80s music. Along the lines of Star Wars, they tell some story about something something universe, evil guy... whatever. 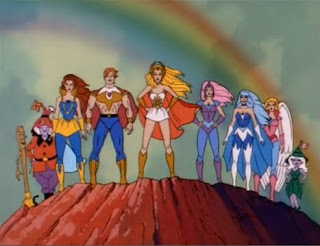 And then She-Ra and all her friends stand under the rainbow, because only THEY can save the universe from the HORDES of EVIL. (Which, mind you, I was about halfway into the episode before I realized they were saying "Hordes" and not "Whores.") She-Ra's Rainbow Coalition to Fight the Evil Whores.


So once upon a time, in a Castle Greyskull far away....

a bird-woman was having a very bad dream. She dreamed that a snorting skeleton-pig-fish man was stealing a baby. "You may have won this time, Bird Lady, but you'll never see this BABY again!" 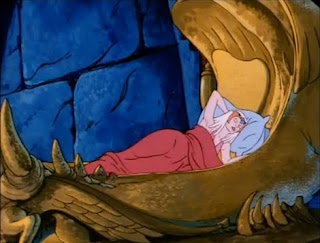 She woke up from her terrible dream, only to see a sword appear in the air and blast open a door that she'd NEVER THOUGHT TO OPEN HERSELF, revealing a magical portal to... somewhere!

Meanwhile, in a Jetsons-type colony, Prince Adam is stirring up a batch of his super special spiced bread, while his giant kitty looks on, Scooby-Doo-like, whining about how hungry he is. Adam explains patiently (sounding suspiciously like Casey Kasem, but apparently he's voiced by John Erwin, who incidentally also voiced Babe the Gallant Pig) that a work of art like his secret spiced bread requires patience. 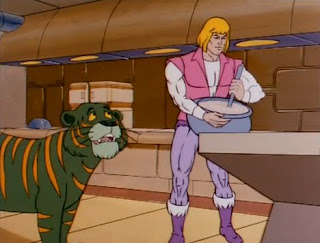 Suddenly, Adam hears a voice in his head, and utters my favorite line of the entire episode: "Shhh! The sorceress is speaking to me by telepathy!" 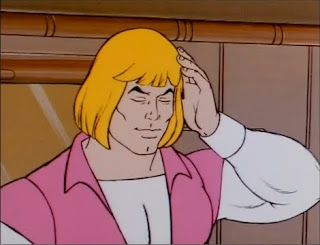 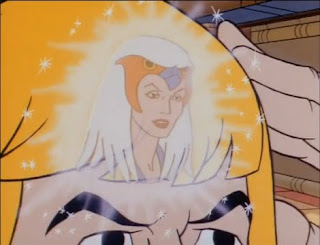 BY TELEPATHY. That means she is IN MY HEAD.

The birdlady in Adam's head tells him to rush to Castle Greyskull RIGHT AWAY. So despite all the nonsense he's just given his cat about how much time and patience his special bread takes, he drops everything, and runs to the castle, where the Bird Woman shows Adam the portal, gives him a sword that looks just like his, except for the gem. ("Hey! Except for this jewel, this sword looks EXACTLY LIKE MINE!") Bird Woman, that saucy minx, then demands Adam go through the portal to look for the person to whom the sword belongs, but she won't tell him WHO. "ADAM, ADAM, PLEASE STOP ASKING QUESTIONS," she whispers girlishly. "JUST GO THROUGH THE DAMN PORTAL AND FIND A MYSTERIOUS PERSON NO I CAN'T TELL YOU ANYTHING ELSE! I HAVE A HEADACHE!" 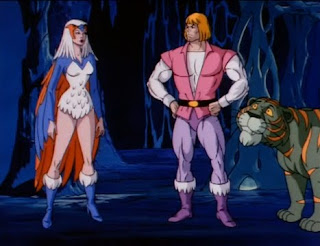 And she pushes him and his kitty through the portal into a Seussian wonderland. Luckily, Adam fits right in with his violet tights and purple Uggs. 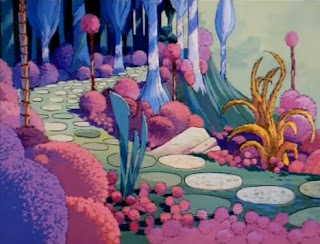 Adam and his kitty do what any characters in a children's show would do upon entering a strange land: they go to a bar.

Where, as it happens, Tom Selleck is sitting with his Rainbow Owl, drinking alone. As usual. 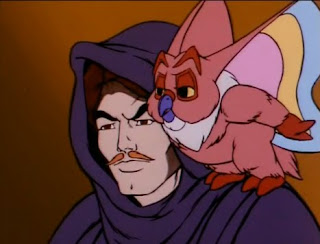 Moments after Adam and the kitty burst in, shocking the locals with his Lilac Uggs ("So 2003!" they whisper), three robots burst into the bar and demand that the harpist "Play something good!" 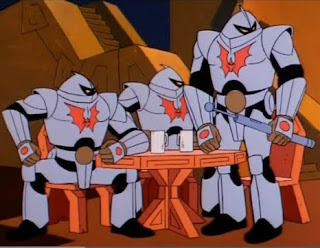 When the bard fails to play the appropriate music, the robots go crazy, forcing Tom Selleck to unveil himself. 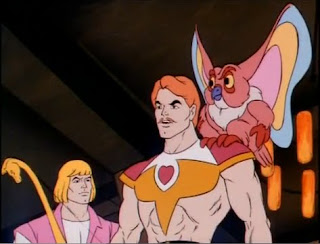 Tom's name, as it turns out, is BEAU. As in "Adam's Handsome New" Beau? Adam hopes so. 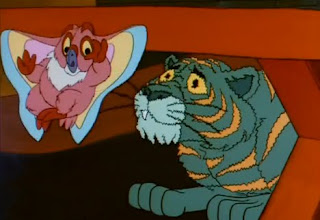 The rainbow owl, as it turns out, is as much of a coward as the kitty, and they become besties under a bar table.

Adam and (his) Beau fight the robots together until the bitter end, where they slam them headfirst into matching pink planter pots. 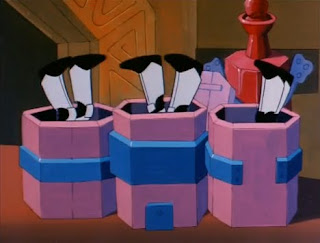 Meanwhile, at the Spider Castle, The Snorty Skeleton speaks to his Evil Whores. You can tell they're evil because they're so sexy. Well, the ladies are. And the dudes are all sea monsters.

I recognize Cat-Ra because we still have her action figure at my mother's house. In fact, N pulled it out of a drawer under the TV last weekend when we were looking for the remote.

Her friend the dementor is the only legitimately scary bad guy. I remember being scared of her when I was little, too. What I didn't realize then is that part of her threat is in her starting-to-sag evil boobs. LOOK INTO YOUR FUTURE, LITTLE GIRLS. 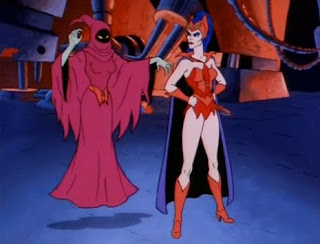 Meanwhile, back at the ranch, the Gayest Ride in Cartoon History is happening: 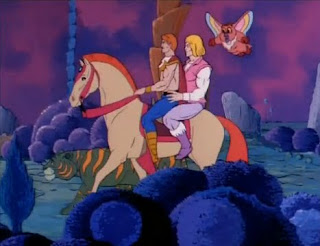 So Adam and Beau and the kitty and the rainbow owl and the pink horse all go to the Whispering Woods, where they meet up with the "rebels" who are composed of like eight farmers with hoes and led by a pink-haired sweetie named Glimmer.

Their meeting is interrupted by this Wacky Witch whose eyelids are part of her hat and Her Wacky Broomstick Sidekick who come to tell them that the Evil Whores are imprisoning all the townspeople and sending them off to the Slave Fields. 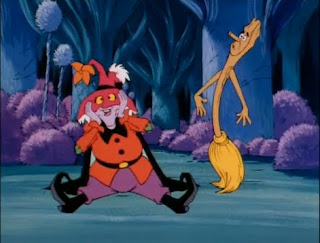 Glimmer takes a stand. "Golly gee, we can't let them get away with it!" 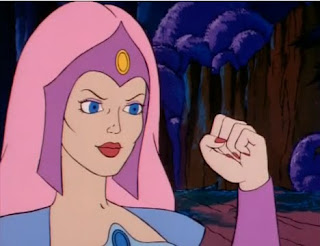 Now this next part is the only one I find remotely scary, and that's when the Evil Whores are rounding up the townspeople to work in the slave mines. What's interesting is that this was 1985, so all the bad guys should be Cold War Era types -- you know, trying to convert Glimmer to Marxism or whatever -- but instead, they seem to be taking a page from the Nazis. Maybe there's just a finite number of ways for Evil Whores to be Truly Evil, and no one did it better than the Nazis. I have to wonder, though, if my very first understanding of the Holocaust wasn't directly in relation to THIS EPISODE: "Ooohhh, I get it! It's like when the Evil Whores rounded up all the townspeople and sent them off to work in the slave mines!"

And that's what truly scares me. 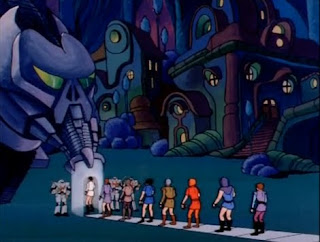 Anyway, so there's a battle, and the real shocker is that PRINCESS AURORA is EVIL. She is! They keep calling her "Force Captain Aurora" or something, and she is SHOOTING A GUN AT HE-MAN, who we know -- but he doesn't know, and she doesn't know -- oh, delicious dramatic irony -- IS HER BROTHER!! 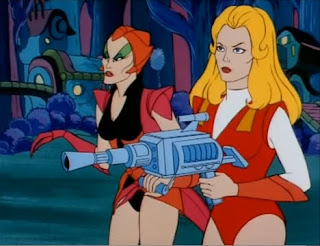 Meanwhile, (her secret brother) Adam runs away, calls on the power vested in him by Castle Greyskull, and turns into He-Man. 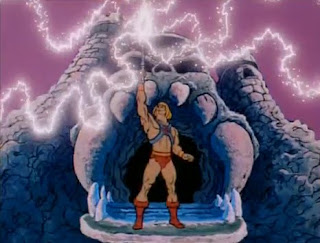 And then he shoots his sword at his pet tiger, and it FINALLY turns from being a trembly, hungry, foolish figure (with a voice eerily reminiscent of Brian Close) into the supremely awesome BATTLE CAT I remember from the action figures of my childhood. And yes, we played with He-Man figures along with She-Ra. 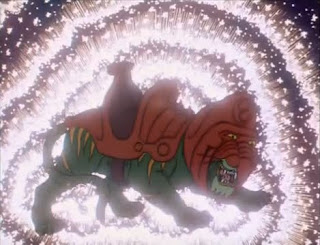 And then a battle ensues, in which He-Man tells a very butch-sounding Scorpion Lady to be more ladylike. Seriously, He-Man? With your Violet Tights and your Beau who wears his heart on his chest, and your pet kitty, YOU feel the need to instruct other people on appropriate gender behavior? The nerve. 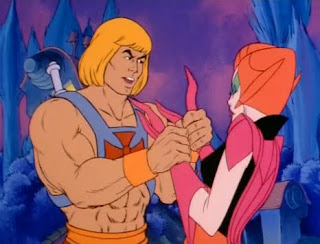 Then Glimmer gets her ears sucked by a sea monster. 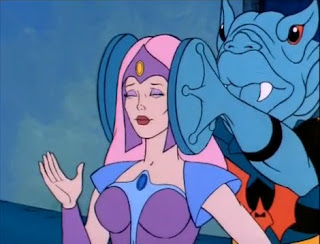 And then He-Man is knocked over by this other sea monster's "Balance Distorter Ray." I'm not making this up. The sea monster can knock you off your balance! Oooooh, how EEE-VIL! 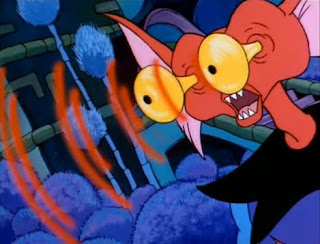 Of course, the battle must finally come down to He-Man and Force Captain Aurora, who are actually brother and sister -- not that you'd guess by their extreme matching Minnesota Blond thing -- and they have a showdown which involves He-Man pulling out the sword (the one that's "except for this jewel, exactly like MY sword") from Bird Lady, only to see.... 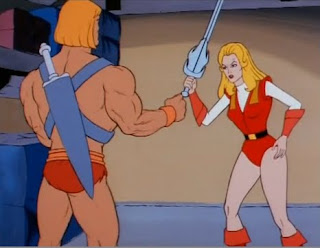 Aurora's face IN THE GEM! 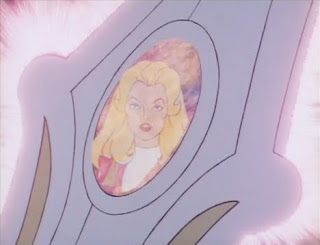 But she doesn't care! A robot appears and knocks He-Man over, leaving Aurora to pick up the sword WITH HER OWN FACE and stare at it... 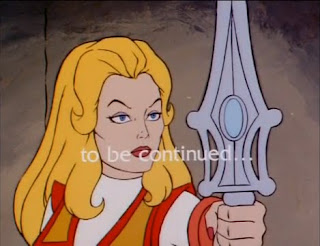 Except I'm not going to continue to recount the entire second half of the episode to you. Not that I won't watch it. On the contrary friends; I still have laundry to fold. It's just that it's so hard to write with the closing themesong ringing in my ears: "For the honor of love... we have the power, so can you!"

How very Colbertian of them.

I'm glad we watched He-Man for a point of reference. She-ra is WAAYYYY better.

One of the programs even my pentecostal upbringing couldn't purge me of. Also part of the best drinking game ever. Create cards: Master of the Universe said, X critter disappears magically, Skeletor laughs evilly...each person draws a card and drinks as the movie goes on. This game works better if you're already drunk.

I totally heart you Molly. This is HILARIOUS!
Kasi

My wife and I laughed a lot at this. You need to do more episodes, please.

not to mention Glimmer's head looks like a giant penis tip.

Molly, I thought you were an agent and didn't realize that you were a writer. My bad. Best to you! Your blogs are funny!!! jc

This is my first and favorite writing from your blog. I couldn't stop reading, I didn't even want to watch the real thing, I wanted your version. And I was very disappointed when I was told I didn't need the second part, I do, I do!

A very important note about Shadow Weaver's boobs - because to any male who grew up in the 1980s She Ra is ALL about the boobies - she does NOT have saggy boobs, the artist rendered her to have the no-bra-underneath-that-silky-robe look which is why her boobs hang more than those of the other combat-bra clad females of the show. If you want saggy breasts that would be Madam Razz.