How to Sell a Chicken McNugget

I almost always have the radio on in the background (I like to pretend it's because I'm such a genius that my brain can't handle doing just one thing at a time, but it's probably just leftover ADD from teaching 7th graders too long). At work, we mostly listen to XRT, at least until Jill gets fed up and yells about the state of music today and changes the station.

The only problem with listening to the radio all the time is that you begin to hear the same commercials. Over. And. Over.

Unfortunately, when I hear a commercial over and over, I start to pick it apart, and -- in short -- if it sucks, it starts to drive me insane. 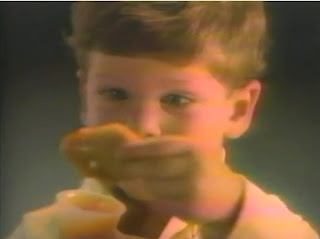 Lately, that commercial is for Chicken McNuggets.

It begins with a guy describing a cool house: it has a fountain, and a giant TV, and I don't know, a fish tank for a wall or something. But, according to the dude, a cool house is NOT ENOUGH. Specifically, he's talking about having a football-watching party. Having a giant TV is NOT ENOUGH if you want to have a football-watching party, okay? Not even if you have a giant TV in a private theater! With cushy reclining chairs! It's STILL NOT ENOUGH!

No one will come to your party, the announcer argues, if you don't have a bunch of Chicken McNuggets.

In fact, the announcer specifically says that your friends will choose to attend a FOOTBALL WATCHING PARTY at the house of the dude with a small TV and lots of Chicken McNuggets INSTEAD of going to the place with the GIANT TV and PRIVATE THEATER because while one can conceivably have a TV WATCHING PARTY WITHOUT A TV, one absolutely CANNOT have a TV watching party WITHOUT CHICKEN MCNUGGETS.

McDonald's, I officially call BS on this one.

Given the choice between watching a football game on a giant TV with no Chicken McNuggets versus watching a football game on a tiny TV with lots of Chicken McNuggets, NO REASONABLE ADULT WOULD PICK THE TINY TV. Chicken McNuggets are not a deal breaker unless you're seven, and you're considering maybe not attending a girl scout field trip because they always make you choose between a hamburger and a cheeseburger when you would prefer McNuggets with your Muppet Babies Happy Meal, okay? It doesn't make you a picky eater or "difficult," it's just that you happen to prefer chicken to beef, and while you're at it, you don't actually like Orange Drink.

But we are adults now, and if we want McNuggets, we can spend the two bucks and buy them ourselves. In real life, if we had to choose between tiny TV and Chicken McNuggets or giant TV and no nuggets, we would still pick the giant TV -- unless the giant TV dude was a total asshat, in which case we'd just go to a bar anyway.

Every single time I hear this commercial -- and it's often -- I get mad at the announcer. Sometimes I try to rationalize with him; other times I just yell. Shockingly, it doesn't work. Radio Man insists on making the same specious argument. So I decided to do some research on McNugget commercials, to see if I could offer Radio Man an example from history of the correct way to market Chicken McNuggets.

And reader? I found it.

It opens with a box. See, McDonald's? You don't have to pretend people will choose a tiny TV over a giant one, you just have to show us a box. 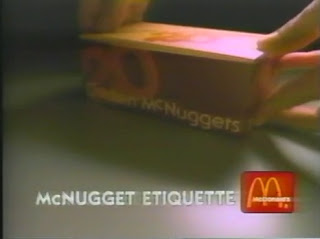 Back in 1987, a box of 20 McNuggets would feed a family of four.
Those were leaner times. Literally!

So first, we have the announcer, who tells us the thesis of this argument: "How to eat a McDonald's Chicken McNugget 20 Piece Dinner."

I feel good about this opening. It's like the reports you write in middle school: "The title of this report is 'What Freedom Means to Me.' In it, I will tell you what freedom means to me." Solid. 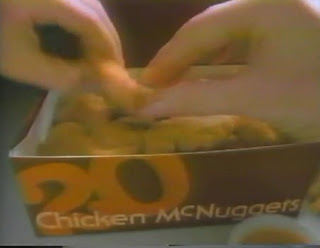 Two hands please. DO NOT DROP THE MCNUGGET.

Are you ready for this? It gets pretty crazy.

Okay, first of all? BEST RAP EVER. Did this win an Emmy? It should have. "Hot shot big dipper little dipper" -- comparing the McNugget to the vastness of the universe? GENIUS.

And then immediately bringing it back to Earth, with humanity's yearning for intimacy ("oops slip dip")? Amazing. 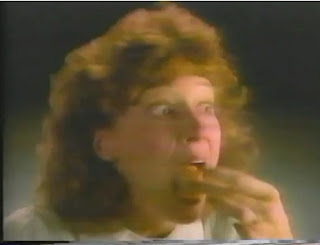 Mom can't believe her luck! McNuggets to eat!
For once she doesn't have to fake her smile!

Meanwhile, this All-American Family is teaching us about the true meaning of sharing. For example, Dads eat before Sons. Steal! 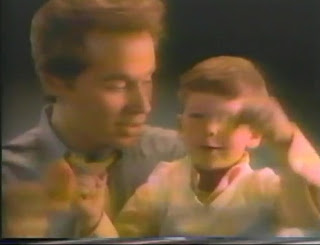 The majority of this commercial is actually shots of this family doing Crazy Eyes. In their defense, Crazy Eyes were highly regarded in the 1980s to be a sign of Excitement and Enjoyment. At least, that's what the director told me at this photo shoot: 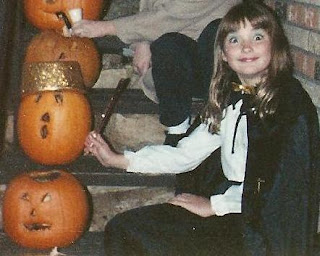 The little girl does her best with Crazy Eyed Happiness, but she ends up just shooting her eyes back and forth like she's looking for an escape. Or, knowing this family, perhaps she's wisely checking her blind spots in case one of her parents is about to sneak up and steal her one allotted McNugget. 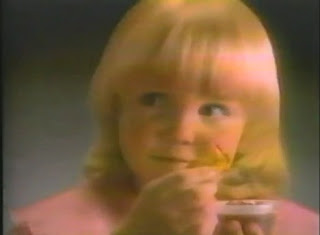 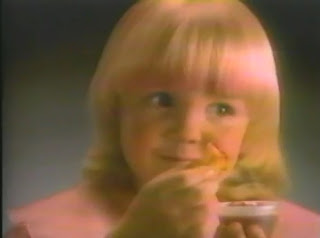 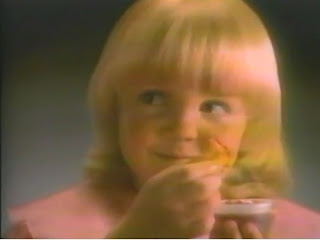 No comment on the haircut, by the way. The 80s were hard for all of us.

The little girl gives Crazy Eyes the Ol' College Try, but then Dad steps in to show her how it's REALLY done. 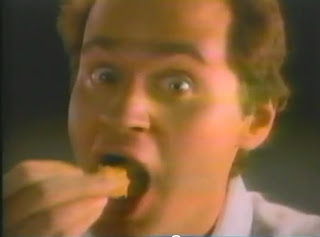 This sequence is like America's a baby, and Dad's trying to convince us to eat our nuggets. Mmmmmm, America! Eat up, baby! 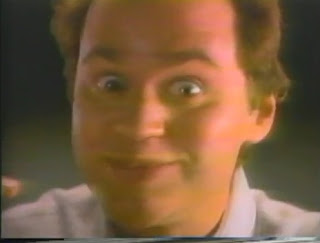 Sometimes I think about what an actor's agent pitched a commercial producer when they were trying to sell the actor. "He's the next Tom Hanks!" 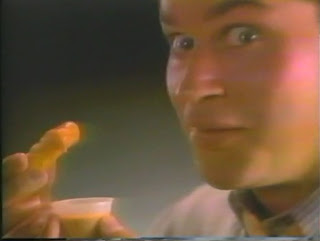 And then the director's like "Okay, Tom Hanks, give me 'Completely psychotic for McNuggets!'" 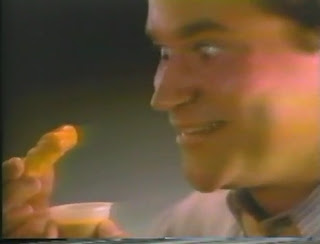 By this time on the shoot, chaos has totally broken out, and the Mom and daughter are like "Let us try! We didn't get to do crazy at the beginning!" 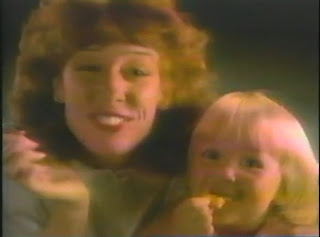 The little girl is pretending the McNugget is her brother's head.

Meanwhile, of course, the Proto-Rapper Lady's Proto-Rap is finally winding down, and the McDonald's Choir comes in singing, "It's a good time for the great taste..."

Interrupted by a clapping machine and cheerleader voices (because it's a rap? I guess?): Seven six five four three two one done!

And finally, the craziest eyes of all.... 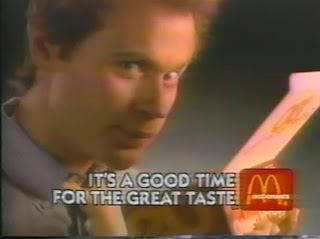 You eat my nuggets, I eat your eyeballs.
Fin!


And that, Mr. Radio Man, is how you sell a Chicken McNugget.