Even Better Than Summers Off 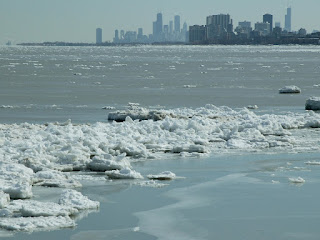 Everyone knows that one of the best things about teaching is summers off. When you're stuck in marble corporate hell, losing brain cells by the minute, slaving for your five personal days, summers off seems like some sort of fairy tale. Forget the fact that teachers commonly work sixty and seventy hour weeks, forget the fact that grading papers at home is one of the least fun activities in the universe, forget twenty minute lunches at your desk with a bunch of smelly tweens staring at you and asking if they can use your computer to download ringtones with their grandma's credit card number that they managed to memorize even though they still can't seem to get the difference between a noun and a verb, forget No Child Left Behind and idiotic co-workers and administrators telling you to "teach smarter, not harder," and parents demanding to know why you're not teaching eighth grade English in exactly the same way they were taught eighth grade English in their one-room school house with Mrs. McCreavy who hit them, forget bus duty and terrorism drills and lockdowns and parent teacher conferences and professional development plans and lesson plans and gradebooks and homework and knife fights outside your door and students getting arrested and curse words carved into your furniture and gross dads hitting on you and spending your own money to buy pencils and paper for your classroom and choir concerts and dances to chaperone and kids trying to sell you stuff to raise money for 4H and band and rodeo club and being told on a daily basis to fuck off and hearing the words faggot and homo and wetback fifty times a day and other teachers talking about you to students and your wallet getting stolen out of your classroom and other teachers crying and the heavy sense of overresponsibility that pushes you to yet another PTA meeting or board meeting or training session and no sleep and dreams about school and Sunday afternoons in the classroom trying to catch up.....

I've been thinking about this a lot lately, seeing as how -- as it turns out -- I actually hate having a job. Given the choice between having a job and not having a job, I pick NOT. Summers off. Remember that? Ten weeks of not having a job? (Actually, I always taught summer school, so I'd only get like six weeks off, but still: six weeks off.) Believe me, I haven't forgotten the fact that by the time you hit summer, you feel like you need every single second of that break to reset your mind and recharge your spirit, because without those summers off you probably wouldn't come back next year, and if you did, it might be awfully difficult to get through the year without "accidentally" driving right through the bus pad one day after school and taking as many anklebiters down with you as you can, because by god if you're going down, so are they. Really, summers are crucial in keeping students safe.

Still, you know what would be even better than summers off?

I would go back to teaching in an instant if I could teach March - November. I would gladly fill my wardrobe with professionally appropriate sandals and shorts-that-look-like-skirts if I knew that there would still be five or six hours of daylight after I got off work. Summer? It's hot out! It would be comfortable to teach in a nice air-conditioned classroom, and on nice days we'd take lots of field trips to the big tree outside where we'd sit in the shade and read the classics together. Ethan Frome's a lot more palatable in the summer, when the frigid cold and depression of winter all seems like a bad dream! Teach Ethan Frome in February? Fantasize about driving into a tree. Teach Ethan Frome in June? Have a meaningful, empathetic discussion about the depths of the human heart, and then meet up with your buddies for frisbee and margaritas after school!

If schools had winters off instead of summers, snow days wouldn't be a problem, and students wouldn't miss precious days of standardized test training to the whims of the weather. Family vacations that used to happen in July? Take them over Christmas! Stay a month! Go somewhere warm, have fun! Everyone knows that the five weeks between Thanksgiving and New Year's Day are almost worthless in the classroom anyway -- why not just take that time off, and let the students learn in the long, lazy stretches of uninterrupted summer time?

I miss teaching. Of course I do. I miss kids and autonomy and the freedom to do whatever you want on any given day and the moments when someone really gets it. Right now, though, it's not quite enough to win me back; I'm too happy with all the extra time and mental space I have to work on my writing. But believe me, if, rolling out of bed on a 9 degree morning, hours before the sun even thinks about showing up for its allotted one minute a day, if I could say to myself "If I were teaching right now, I wouldn't have to get up until March...." I would be back in the classroom in a heartbeat.... or rather, in the number of heartbeats it takes to snuggle my way through the last two weeks of February.

In The Kite Runner, Amir said he loved winter, because he and Hassan had vacation from school. They would spend days snuggling under blankets and playing cards - flying kites and hearing stories from Hassan's father, Ali. At first I was like - seriously? winter vacation? - but the way he described it made it sound wonderful. You did the same.

If schools had air conditioning I might be with you. Actually Towson, where I'm a prof, might soon give us a choice which 2/3 to teach (fall, spring, summer).

I think spring might have the best weather in the Baltimore area, so maybe I would go for that.

It will probably vary year to year. But it would be even better to be able to choose each year which time to take off.