The Grueling March of the Rewrite 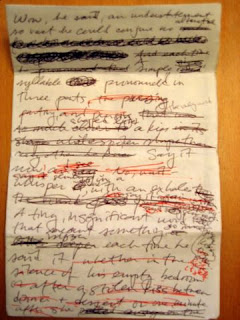 I love my friends and family, and I’m relatively certain they love me, but lately I’ve been noticing a similar glazed expression in their eyes whenever I start talking about my novel. So, they say nicely, you’re… rewriting it? The unspoken word hangs between us like an impolite body odor: Still?

My favorite friends, the ones who are most likely to buy me a beer and maybe even some French fries when we go out, say, but we liked it so much already! It’s wonderful! What could you possibly have to do on the manuscript, still?

Rewriting is a tricky endeavor. The first draft is a dizzying, careening, gleeful car chase through the countryside, in which you can follow any whim, whip around any corner, run stop signs, cut through backyards, hit birds and cats without slowing – anything goes! It’s great!

In the second draft, you go back over your route and see that it is quite mad, and there is a much more logical path to follow if you want to get from here to there. Your first dash showed you all the awesome little sights and secrets you wouldn’t have found otherwise; your second draft figures out a way to include all the best parts without hitting quite so many dead-ends. The third draft starts looking at themes and character motivations and story arcs and attempts to tidy up all the loose ends and unfired guns and pull everything together in a lovely, cohesive manner. Any subsequent draft after that is cosmetic, maybe looking at the language itself, maybe finding a scene here or there that could be tighter, cleaner, better paced, more interesting, prettier, whatever.

The fifth draft of my novel was good enough to get me an agent. My agent, who is wonderful and brilliant, who writes me little notes and sends me pictures of stick figures doing dances, loved my fifth draft, loved the story and characters and setting, and suggested a number of cosmetic changes: explain this character’s motivation, give me some backstory on this thing, make this moment a little more complex. So I did; I spent a month reworking, rewriting, adding a few sentences here and there to lighten, to darken, to color and shade and enhance.

And then…. we came to the seventh draft, and my agent and I had a big heart-to-heart, and we decided that a major plot point was problematic. This plot point, which drives all subsequent action in the story, actually hijacks the entire story, and after it no one has much room to think about anything but its aftermath. And that, we decided, is kind of a problem. Because the story isn’t about that one plot point, and yet, due to the nature of the moment, it must be. So… time for another re-write.

In order to take out the pivotal moment in the plot, the entire book must be reshaped. Good news: the story will be much more subtle and interesting and unique without it. Bad news: attempting to do this will be like assembling a turducken – the bones must be removed and the shape of the thing must be recreated and refolded into the larger structure of the real story. As it turns out, this will be incredibly difficult.

In the end, though, it will be great. Last night I finished re-writing the first chapter for probably the sixth time, and when I was finished I had a chill up the back of my neck. I stepped away from the computer gingerly, carefully hitting the ctrl+S and closing out the document, feeling as though I’d managed to get to exactly the right place by sheer luck and magic. Of course, it wasn’t luck or magic, it was months and months of hard work, it was hours of agonizing over character and motivation and plot, it was brainstorming with Ali and a bottle of champagne on NYE, it was workshopping the chapter at Story Studio and reading it out loud to myself, to Natalie, it was phone conversations and g-chats with the beer-buying friends who love me and love the story and who don’t quite seem to trust me not to fuck this up. But finally, at last, there it was, and it struck all the right notes, and it set the right tone, and it was exactly, entirely, at last… perfect.

In a moment I’ll open that document again and re-read it, and knowing me I’ll tweak some sentences, switch some words and re-think this one paragraph that I think needs to be there but doesn’t exactly fit, but finally I feel like I’m in a really good place with it, and in a few more days I’ll be finished with this turducken draft, and I’ll send it off to my brilliant agent, who will either have a little dance party in her office or write me a long letter about why it STILL needs a lot of work, and the march will continue.

Last fall, my future BFF John Green said that of the final, published draft of his wonderful book Looking for Alaska, only 10% of the original manuscript survived. “The challenge of the book, ultimately, was not writing it, which was easy, but revising it, which was hard.” He described writing a book as a lengthy game of Marco Polo: “I spent four years sitting in a basement, writing, saying Marco… and years later, I got an email from a reader, and basically all that email says is… Polo.”

So that’s what I’m doing with my life right now. That’s where I am. And even though it’s hard, agonizing, maddening work, I’m confident that the story will be better in the end, which makes it all worth it.

There's enough coffee in the world to get this done. I'll make sure of it.

Go for it, Molly! You're writing on this blog is so beautiful I can't wait to actually read a work of fiction from you.

What amazes me is a writer's capacity to let go of that much writing/plot emotionally. Does it ever feel like you're getting rid of part of yourself? I wonder if this process could become a metaphor for life.

Some people may find the length of the rewrite process ridiculous, but...they just don't know. Even in a first draft of a story I tend to rethink each paragraph at least 15 times, and when you go back looking to ensure consistency in your overall narrative arch or thoughtfully develop your characters...god help you. I just started looking over what I wrote for NaNoWriMo to see if any of it can be salvaged in the long run, and I am deeply impressed with how far you've come with your own novel. I thought this post was really inspiring in the sense that someone I know! Who went to my college! Can do this! So hopefully I can too.