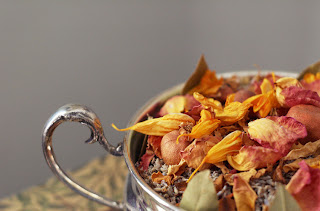 Our house smelled weird. Was it the smell of winter coats drying, of the pile of laundry that should have been done a week ago, the lingering scent of microwave popcorn that ALWAYS burns, or the two bad mice who do nothing but bite each other on the face and poop? Maybe it was the boys below us who like to smoke and spill beer and pet dogs and let smelly homeless musicians crash on their couch; maybe it was that the trashcans in our alley are under two feet of snow and so garbage bags tend to stay in our kitchen longer than they should; maybe it was the simple fact that it's February in Chicago and the windows have been shut tight since before Halloween. In any case: weird. Not bad, exactly... but not good. Definitely not good.

We're not starving to death, yet, but we're living pretty close to the line here, and we can't afford to drop thirty bucks on candles every time the house smells a little weird.

So the other night, determined to change the prevailing odors of these winter-closed rooms, I whipped up a batch of Poorpourri, using only stuff I already had in my kitchen (because I try not to go outside unless I absolutely have to. Have I mentioned how cold it is? And it WON'T STOP SNOWING. I heard on the radio the other day that in the first eight days of February, we've only had eleven minutes of sunshine. ELEVEN MINUTES. I hate winter!)....

-- Water
-- Some chunks of an apple that was too little and mushy to eat
-- Apple Spice Tea bags
-- Lots of cinnamon. Tons.
-- Some nutmeg
-- Some sugar

Bring to a boil... and simmer for as long as you want. Add water & cinnamon occasionally. I ladled the mixture into smaller bowls and set them in other rooms until they cooled off, then dumped the cooled mixture back into the original pot.

It worked GREAT. My house smelled warm and rich and applecinnamony for days. When I walked in from the snow/rain last night, the house smelled so yummy and cozy that I almost -- almost -- appreciated the snow outside, wanted to curl up with a good book and watch the snow fall past the yellow streetlights on Western, and didn't even mind the sounds of my smelly neighbors playing the same eight-bar bass loop over and over for an hour. Such is the power of Poorpourri.

I'm in Iowa, so I totally understand the looong winter!