Over the weekend, I accidentally started looking at Chicago Dog Rescue 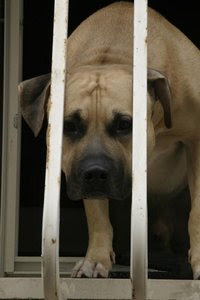 websites, and within minutes I was getting weepy. Believe me, I did NOT used to be the kind of person who got misty over… well, anything. I didn’t cry at a single movie between 1988 (when Littlefoot’s mother fell in the crevasse in The Land Before Time) and 1997 (when Laertes found out that his sister was dead in Branagh’s Hamlet). In fact, I used to make fun of the criers. Mary Anne Spier, in my opinion, was a real pain in the ass. I used to be tough. I used to be impenetrable. Now I’m a real weiner.

Now, all it takes is a list of “Ten Favors a Dog Asks of Man” on a dog rescue site to start me sniffling. (“Before you scold me when working with me, consider: perhaps I am uncomfortable from digesting my last meal; perhaps I was exposed to the sun for too long; or perhaps I have a worn-out heart.”) (A worn out heart!!)

This morning, it was: this article about stolen puppies that got me. “The burglar is believed to have filled one of the store's plastic garbage cans with golden retrievers, boxers, beagles and huskies, plus a Shih Tzu, a puggle and a Pekingese before escaping out the back door.” Puppies in a garbage can? Isn’t that awful? I know it makes me sound like SUCH a girl, but seriously, those poor puppies! The only thing puppies want is kisses and food and a toy to chew on, and these guys get dumped in a garbage can and thrown in a truck. It breaks my heart.

Why am I such a crybaby about dogs right now? Maybe it’s because my own dog, who is the best dog I’ve ever, ever had, is currently living with my mother two hours away, and I feel like a real asshole about it. Also, I miss him. He’s in the best possible place a dog could live, with a woman who slept on the floor with our dying golden retriever when she was too weak to get up on the bed anymore, but I still feel bad that he’s not with me. After all, I made him a promise when he first came into my life, after nearly eight years of bouncing from house to house, that he was in our family now, and that we’d take care of him for the rest of his life. He’s living with my mom, so I’m not technically breaking that promise, but….

Maybe it also has something to do with all the rescue dogs I’ve met in the last few months. We spent a good bit of time with the Greyhounds Only people this summer, and we met some amazing dogs, and learned about some wretched racing conditions (for example, a greyhound racing facility in Florida was recently busted when random drug testing found levels of COCAINE in the dogs’ systems. When they investigated the track, they found dead dogs stuffed in freezers). Recently, we met some New Leash On Life dogs, and I fell in love with Bea, the pumpkin headed pit bull.

N. and I keep a “dog jar” where we’re throwing all our spare change; at the end of the year we’ll donate it to a dog rescue organization or two. Meanwhile, I’m looking into volunteering with one of the dog rescue groups in town.

And yesterday, N. and I decided that though we can’t rescue any dogs for a while, we can do good on a much smaller level. So now we have new members of our household: two little mouse sisters. As the kid at the pet store said, “You’re rescuing them from being snake food!” Sometimes, the smallest act of charity makes a difference.