In honor of the first day of NaNoWriMo, and because I'm supposed to be writing, not blogging, today, I present:

1. What's the one book or writing project you haven't yet written but still hope to?
I’m too superstitious to say, but it’s a title I came up with when I was in sixth grade. Then, I wanted to write the book to match the title. Now, I want to write about a sixth grader writing the book with that title. It’s so meta!

2. If you had one entire day in which to do nothing but read, what book would you start with?
I have those days more than I should probably admit. I guess I would start with something by Maureen Johnson, because I just read her Devilish yesterday and enjoyed it. Once I find an author I like, I tend to read every book she’s ever written. 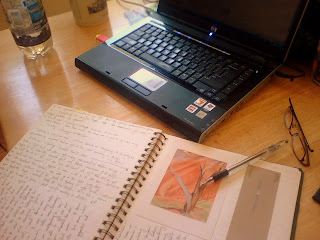 when I was little, a Bayeux Tapestry for the elementary set. I kept little diaries all through my childhood, but I didn’t start writing in earnest (or taking myself seriously, maybe) until 9th grade, when I started writing in a pink notebook. Thirty seven journals later, I’m still writing in a rather pink little book.

4. Where do you get your best writing done?
I’m absolutely a café girl. I grew up just outside Madison, WI, which has a large number of fantastic cafes, including a long stretch of nothing but cafes (and bars and weird little stores) called State Street. We loved State Street. My friends and I took our journals to every single café on State St between 1994 and 1998. At Grinnell, I wrote at Saints Rest and the Forum and Bob’s and Burling and pretty much everywhere else; my college journals have headers like “2:09 pm, bench behind the science building” “6:16 am, fire escape outside Langan” “7:36 pm, golf course” and so forth. In ABQ I mostly wrote at the Flying Star and sometimes Starbucks. Now it’s a little café right down the street from me. Of course, I also write at home, but it’s easier to procrastinate when there are dishes to be done and bills to be paid. 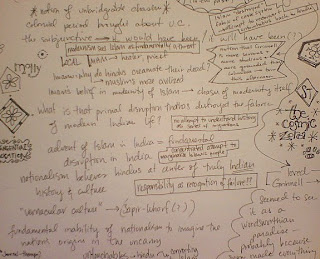 My favorite thing I’ve ever written, though, was written on the couch of my little house in Tijeras. I was terrified to write it, so I locked myself in the house with beer and green chile dip and ice cream and didn’t let myself leave until I was finished. I think I pulled an all nighter, but I absolutely succeeded.

5. What do you listen to when you write?
Music, always. In Chicago, I listen to WXRT a lot, which I love not only because it plays good music, but also because my parents listened to it when they were my age, and I like patterns and legacies. I also listen to mix tapes (yes tapes) that I made a million years ago and itunes set lists with names like “angsty high school songs” and “chick flick hits,” depending what I’m working on.

6. What's your favorite writing "machine" you've ever owned?
I do love laptops, because they help me to write in cafes. Currently, though, I think my favorite “machine” is my little USB memory stick, which has all of my works in progress on it and which I can plug into any computer and get to work.

7. What's your best guess as to how many books you read in a month?
Between 20 and 30, probably. It’s a little embarrassing, but I’m trying to own it. I do like being a go-to girl when people want suggestions, and I love talking about books…. Ah, hell. I love to read. No apologies. 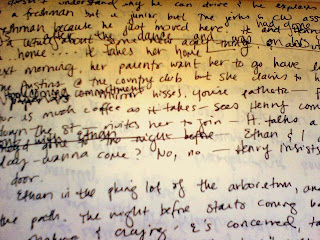 As a teenager, I loved Ann Rice’s rich historical settings, whether they be ancient Rome or turn of the century New Orleans. Ditto Marion Zimmer Bradley. That said, I do looooove reading about the 1920s and 1930s.

9. What's the one book you remember most clearly from your youth (childhood or teens)?
I can never answer “one book” questions; I feel so bad about leaving the other books out. In second grade, it was a book called Champion Dog, Prince Tom, about a cocker spaniel who wins every AKC challenge ever invented. In third grade, I was obsessed with this book called Race Against Death, about a diphtheria epidemic in Nome, Alaska. The life-saving serum is carried across the tundra by a series of dogsleds in record time, saving the town and beginning the tradition of the Iditarod.

10. Why did you start writing? Why do you write now?
Betsy Lerner says, “As far as I can tell, people write for exactly two reasons: (1) They are compelled to, and (2) they want to be loved.” (“And that is why writers are so crazy.”)

That pretty much sums it up.

Oh no! Champion Dog, Prince Tom! I love that book!