Escaping the Cultural Wasteland That is My Life, or: My Mother Makes Me Cool

As she is the person who brought me into this world, who began listening to what I had to say before I even had words to speak, who spent the early 80s feeding me applesauce and cheerios, my mother is generally predisposed to like me. We’ve been hanging out together since the Carter administration, and for the most part, my mother seems to think I’m pretty okay.

Every now and again, I manage to display my wanton ignorance and cultural illiteracy in such a way that so clearly pains her I start to wonder if she’s trying to figure out how to dump me.

This happened twice over Thanksgiving.


First: The Case of Alice’s Restaurant.
The setting: Thanksgiving morning, in the kitchen.

Mom: I got to hear the best Thanksgiving song on the radio this morning!
Me: What’s that? 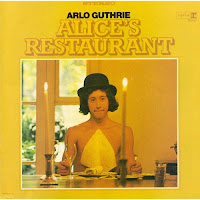 A minute later she reappeared, joyfully carrying a copy of Alice’s Restaurant on VINYL, probably from the album’s original 1967 release, probably handed to her by Arlo Guthrie himself, ten minutes after he first recorded it. “Do you even have a record player?” I asked doubtfully.

Of course she has a record player. She still has the blanket from my crib (the dog sleeps on it) and the baby scooter she scooted around in during the Truman years. Making the record player WORK was another story; she made me take it apart and fix it, which first required figuring out exactly how a record player works, then figuring out why this one wasn’t working, then trying to tape the broken belt thingy back together, and finally replacing the broken belt thingy with a giant rubber band, which actually did work. Kind of.

So then we all trooped into the living room and listened to about five minutes of the scratchiest, garbledliest nonsense you’ve ever heard, of which we weren’t able to make out more than the frequent repetition of the word “garbage.” Nat and I listened patiently but finally admitted we had no idea what was going on, and my mother gave up. We returned to the kitchen to peel some potatoes. Mom disappeared again, reappearing a moment later, triumphantly, with: Alice’s Restaurant! On CD! So we went BACK to the living room, where this time we got to hear a very understandable and charming version of Arlo Guthrie’s 20 minute long song/story/poem “Alice’s Restaurant Massacree.” And of course we were charmed, and we even laughed a few times, and at the end we asked my mother questions about the sixties and the draft and the crazy long-haired young folks back then and she gave a long, happy sigh and said, “It was a different time.”

I sense a tradition.

Second: The Case of Jane Austen
The Setting: After dinner, the same day. 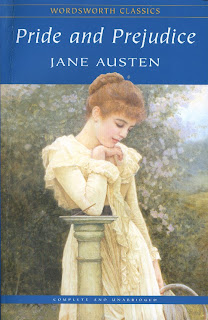 The answer is: I’m not sure. I took a lot of weird, specific classes as an English major (Post-colonial feminist literature, Milton seminar, “Women/Writing/Nature” and so forth) and daydreamed through my required Brit lit survey courses (when I went to study for my “Traditions of English Literature” exam, I found pages and pages of notes with drawings of severed heads and doodles and ‘Matthew Arnold… Dover Something… I like puppies!’). But really, no one ever made me read Jane Austen, and I think I’m glad. I have a feeling that Pride and Prejudice is one of those books I would have been, well, prejudiced against if I’d been forced to read it as a teenager.

Instead, I got to read it this week and LOVED it. It looks boring, and it’s a little hard to get into, but Pride and Prejudice is the gushiest, girliest, OMG romantic book I’ve read in a long time. I read the last 100 pages at my desk between calls yesterday, feeling both indulgent and academic, because though it is a gushy girly smoochfest, it is also a Great Book and Classic Literature.

You’ve probably already read Pride and Prejudice (or seen the movie – even I have seen part of the Colin Firth as Mr. Darcy version), so I won’t say too much more about it. However, if, like me, you’ve been living in cultural sin and haven’t gotten around to reading it yet…. DO. It’s the perfect combination of edification and enchantment.

Thanks, Mom! Please don’t dump me yet.

Okay, I don't know how you got through this much of your life without hearing "Alice's Restaurant" at least once, but I'm with you on the Pride and Prejudice thing. I read it for the first time just a few months ago, and I completely agree that I would have hated it if I'd had to read it for school. I had also never read Jane Eyre, and was pleasantly surprised when I read that for the first time a year or so ago. I wish school didn't have such a magical ability to strip the fun out of reading the majority of novels.

You forgot the best part of the Alice's Restaurant story. After you told your mom you'd never heard it...and she replied with her own blank stare and "I can't believe you just fucking said that."

WHO ARE YOU?!?!?!?! I am as shocked as your mom, for BOTH reasons...I can't imagine which is more shocking...(Sorry for the freak out, but I thought FOR SURE at some point we had discussed Alice's Restaurant...)

I think the Jane Austen is much more shocking than the "Alice's Restaurant," considering who Molly is and whatnot and the fact that Arlo Guthrie is fairly easy to avoid these days.

HOWEVER, my parents have that exact same record, and in high school when I was really into listening to records (I "discovered" the Beatles! Johnny Cash! Santana! And, um, Herb Alpert and the Tijuana Brass—I'm sure Rory knows that one), I found the Arlo Guthrie and listened to it a lot. And actually saw him live TWICE, once at the Sunshine Theater and once at the Kiva Auditorium. With my mom both times. So I guess I'm a little surprised that you never got into your mom's records when you were younger.

The Keira Knightley Pride and Prejudice movie is fantastic (we have it on DVD—come over and watch it over Christmas!), and so is Bride and Prejudice, a Bollywood-style version. Which reminds me of how shocked I was once at GTT when Natalie (and the rest of whoever she was performing with) had no clue what Bollywood was!

And, speaking of ear worms... it will be in my head ALL DAY LONG

Really, Molly? Alice's restaurants? You know, officer Obie just died a few years ago and I drive past the church a couple of times every summer in Western Massachusetts. Plus, the restaurant still exists!

I just had to go play the track and by the way, go rent the movie!

Officer Obie just died a couple of years ago. I drive by the church a couple of times each summer and the restaurant's still there in Western Massachusetts.

In honor of your newfound understanding, I'm playing the track right now. As for yourself, go rent the movie!