The System is Not Okay

At 27, I am working in a non-educational setting for the first time in my adult life. The experience has been nothing if not illuminating. As is often the case, my most shocking revelations have been the most simple.

Primarily, this: that the “real world” does not spend much time thinking about public education in this country, beyond the most basic points of impact on personal life. Outside the education sphere, most people only think about school personally and anecdotally (eg. My kid’s having trouble in math class, that teacher doesn’t assign enough homework, I always hated English class); most people do not think about the schools on a systemic or national level.

Okay, obvious, right? I mean, who thinks about the police force on a systemic level, other than those who work within its sphere? Who thinks about nursing on a national level, other than nurses? It’s rather unsophisticated to assume that people who aren’t me care about the same things I do. Contrary to long-standing belief, recent developments seem to indicate that Molly Backes is not, in fact, the axis around which the world spins.

However, after four years in the trenches of No Child Left Behind warfare, it seems incredible to me that the rest of the country doesn’t realize what trouble we’re in – and more importantly, doesn’t seem to care. How can you not care? The chidren we educate today determine the world we live in tomorrow. This is not an abstract concept: our children are our future. And we are royally screwing ourselves.

As anyone who’s ever met me knows, I can’t talk about teaching without getting a little riled up. Having (temporarily?) escaped the trenches, I find myself an unhappy ambassador to a disinterested world. The most common question I get is, “Why aren’t you teaching this year? You’d be making a lot more money.” At which I must restrain myself from screaming: THE PUBLIC SCHOOLS ARE FUCKED! THE SYSTEM IS FUCKED! IT’S A GODDAMN NATIONAL DISASTER!!

Instead, I usually say, “I heard myself bragging, last spring, about how good I’d gotten at teaching to the test.”

At this cue, any good education nerd would blanch. Any good education veteran would nod knowingly. Anyone who’s been in the trenches of low-income “failing” schools would shake her head sympathetically.

In the real world, people don’t react. They don’t see the problem inherent in the statement. They wait for me to finish my explanation. At best, they say, “Oh, is that like, that No Child Left Behind thing?”

Yes yes yes, it’s like that No Child Left Behind thing! Take five minutes to think critically about what’s happening here. We’re testing the children non-stop, because George Bush wants to hold them accountable for their learning. 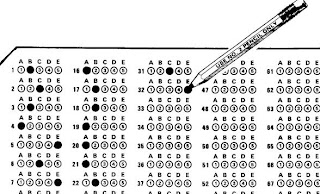 Teachers must teach to the test or lose their jobs. When the school’s scores come back low in reading, the entire staff cranes its accusing neck toward you. The principal asks you, “Why aren’t you giving your students what they need?” The parents tell you, “I’m taking my student to Sylvan, because no one in this school is teaching him to read!” The district sends you to workshops where morbidly cheerful presenters give you photocopies of every single power point slide in their lecture, and tell you “Don’t teach harder, teach smarter!” until you realize that the only way to teach smarter is teach to the bubble. Teach to the number two pencil grinding away at the next question. Teach to the vocabulary list that says “syllogism” is a word every third grader should know.

Nobody listens to you when you say, “What if we stopped testing them every two weeks, and gave them an extra forty minutes of instruction?” or “Why are we holding special ed kids accountable for performing at grade level? If they could perform at grade level, they wouldn’t be special ed.” or “Weighing yourself every day doesn’t make you skinnier.” or “The children are having panic attacks. We are hurting the children.”

Outside the sphere of education, what the world knows of testing is this: Teachers get summers off, and the children of this country are stupid. Therefore, we should hold them accountable and stop throwing good tax money down the drain by paying our lazy ass teachers to do nothing.

What the world doesn’t know of testing is this: 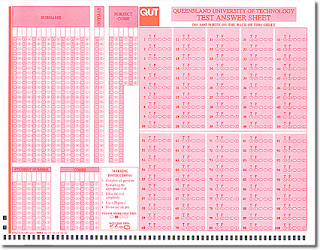 The mania for standardized testing means that children (the children of “failing” schools, the children of inner-city and rural poverty-level school, the poor kids and the non-white kids) are not being taught, they are being trained to perform on tests. Teaching to the test means teaching students how to write concise short answers (my old school had a formula for it: Restate question, Answer, Cite evidence, Expand on answer: RACE), but not teaching them to write paragraphs and essays, not teaching them to write thesis statements and supporting evidence, not teaching them to write research papers. Standardized tests cannot evaluate you on your research-writing abilities; they can only ask you multiple choice questions about some arbitrarily established “research process.” Teaching to the test means spending the year preparing the students to take the test, and not preparing them to perform at the next grade level. In my first years of teaching, when my classroom was still very writing-intensive and valued critical thinking over rote memorization, my students came back from high school and told me that 9th grade was easy after my class. After so “successfully” teaching to the test last year, I honestly don’t think my last batch of students could say the same thing.

Of course, this does not apply to the children of wealthy districts. Their teachers still have the luxury to help them think critically, to broaden their horizons, to go in depth. It is overwhelmingly the poverty-level schools who suffer under No Child Left Behind, whose teachers must forgo any but the most direct instruction, whose students are being trained to take tests but not taught to think.

I can’t even begin to talk about how badly No Child Left Behind is hurting the special education kids. We’ll save that for another day.

For now, I’ll just say that I have the deepest empathy for David Wasserman, the Wisconsin teacher who protested the state tests by refusing to give them. After being given the choice between his protest and his job, he caved, choosing to proctor the test in order to keep his job. In the public school system, it literally comes down to that: choose to conform or leave the profession. Unfortunately, every teacher who stays makes the same choice every year. And those who don’t – those who leave – we take up the burden of ambassador to the apathetic world, desperately pulling the fire alarm in a crowded room when nobody is listening.

You continue to say things about the education system that I think but don't/can't express.

it is up to each state to design the test that will be used for NCLB, not the federal government. NCLB only says there should be a test, and that there should be improvement.

Also, testing once a year (which NCLB mandates) is not my definition of "testing the children non-stop".

But if you need to vent, go bonkers. Teaching *is* stressful.