More Thoughts on No Child Left Behind 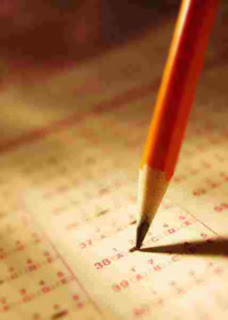 I started writing this as a response to Dave's comment; I intended to post it in the comments section. Once it surpassed two pages, I figured I may as well post it as a full blog entry.

Disclaimer: My understanding of NCLB and its ramifications comes from working in public schools in two different states, in various roles, since 2002. Every state and every district is different, but I do believe that there are many schools across the country that are similarly affected. Feel free to agree or disagree with me. I'm just reporting what I saw and what I lived through in the last few years.

it is up to each state to design the test that will be used for NCLB, not the federal government. NCLB only says there should be a test, and that there should be improvement.

Also, testing once a year (which NCLB mandates) is not my definition of "testing the children non-stop".

But if you need to vent, go bonkers. Teaching *is* stressful.


It is up to each state to design the test, and some of them are better than others. New Mexico’s state test was actually fairly good, as standardized tests go. However, it took over a week to administer, in which we lost almost all instructional time. So, there’s one week gone.

Under NCLB, a school is determined to be “failing” if it fails to meet the targeted proficiency percentages (Adequate Yearly Progress, or AYP) in reading and math in any subgroup. Subgroups include categories such as race, class, grade level, and special education, but are only counted against a school if they have a certain number of students (in NM, it was 20). In the school where I taught, we had fairly large subgroups of race and class (something like 70% of the school was on free or reduced hot lunch), so the subgroups that were counted against us were the grades (7th and 8th), the races (Caucasian and Hispanic; we didn’t have any other subgroup large enough to count), the economic groups (free and reduced hot lunch), and the special ed group, which was further divided into the ELL group. Each of those subgroups was then counted separately for reading and math, thereby making fourteen subgroups total (and I might be forgetting something). Our school had never made the targeted proficiency percentage in the subgroup of Special Ed Math, one out of the fourteen subgroups, even though every other subgroup, as well as the school as a whole, had achieved its targeted proficiency; because one subgroup of twenty-four students had failed, the school failed.

The only schools in our district that ever DID make AYP were those that had fewer than twenty kids in their special ed subgroups, keeping the special ed scores from counting against them.

If you don’t make AYP, your school goes through a series of increasingly severe consequences, ending in school restructuring (everyone at the school is fired and has to reapply for their jobs). There’s a flow chart here that outlines the process. In my experience, once you get to year two or three of School Improvement, the school’s entire focus is on simply passing the test. At this point, as a teacher, I was told by one principal to “target the kids who were going to fail us” and basically ignore the rest.

Additionally, because the state tests (in NM, but I know a lot of states are similar) are given in late winter/early spring, but the results don’t come back until the next fall, the data has such a slow turnaround that it doesn’t do much for strategic “curriculum” (aka teaching to the test) planning. THEREFORE, most districts elect to give another set of standardized tests – “short cycle tests” – to chart growth and better predict potential failure or success in the next round of State NCLB tests. The test our district used, a nationally used, computer-based test not dissimilar to the GREs in its adjusted difficulty according to each previous answer, came in three parts, a reading, math, and language usage test. Each test was taken on the computer, and each test took at least one class period to complete, though the reading and math very commonly took two or more. This test is given three times a year, in August/September, January, and April. Even if you assume the minimum time for each test, at 45 minutes per each of three tests, three times a year, you end up with almost seven full hours of testing, in addition to the week of state tests. In other words, with nine full class periods devoted to the short cycle test, PLUS the twenty full class periods devoted to the yearly state test, assuming a forty five minute class period, each child is losing almost six weeks’ worth of instructional time.

Moreover, in “failing” schools, teachers are often encouraged to give students STAR reading and math tests once a quarter, which take up yet another class period with very little useful data yield. Personally, I smilingly refused to give my students STAR tests, on the grounds that I could learn more about their reading levels by READING WITH THEM for those four class periods. But the other English teachers in my school did give those tests, increasing their students’ test-taking time to 33 class periods devoted to testing, and if the math teachers did the STAR math tests, it’s 37 class periods solely devoted to testing. Thirty seven class periods… seven and a half weeks of school.

In my opinion, that certainly qualifies as “testing the children non-stop.”

You might argue that NCLB isn’t inherently evil, because it only mandates a yearly test, and the states are the ones who drive the length and breadth of that test, but I can’t see how you can possibly separate NCLB from the domino effect of testing and stress it inspires in schools all over the country. By 2014, NCLB says that every school should (and every subgroup within a school) should be at 100% grade-level proficiency in reading and math, which nearly everyone agrees is statistically impossible. As the percentage levels for targeted proficiency rise, more and more schools will be affected, until – unless NCLB is changed or repealed – even the wealthy and high performing public schools will be scrambling to make AYP, a nearly impossible task when the special ed and ELL subgroups are counted against a school. According to NCLB, the special ed subgroup must have the same percentage of students performing at grade level as the school as a whole is held to (and that percentage goes up each year), but if you can perform at grade level, you’re not special ed. Because of this requirement, I have seen schools (not necessarily the ones where I taught) try to keep students in the special ed program to bolster scores, and I have also seen schools try to keep students out of the special ed program or out of the school in order to keep the subgroup under the critical mass number where it counts against the school. As I said before, the only schools in our district that ever made AYP (while I was looking at the data, at least) were the ones whose special ed subgroups weren’t big enough to count against them.

How can you possibly have a healthy and constructive educational environment when everyone’s blaming everyone else for the school’s repeated failures? How can you possibly teach anything but the test when your job is on the line and everyone in your community will hate you if you don’t get enough of these kids to pass the test?

And what the hell are we doing to our children?

I have some experience with STAR Reading/Math etc from my time at Saint Paul Public Schools. I set up the renaissance learning packages of program for a school that was very successful (a 40% improvement in student scores in less than 3 years was attributed largely to the renaissance learning software and training the teachers had). The school was used as a model for other elementeries in the area. So I know the technology. :-)

A school can choose to do star testing, but Star Testing is *not* marketed or meant to be a stand alone solution. A principal or school administrator can require kids to take additional tests, but that may not be the best way to teach kids. And taking Star Tests (or other additional tests) is not required by NCLB.

As for the groups, yes, NCLB does require tracking of groups. I see them as one way to make sure that everyone is doing better. On the other hand, many schools get rid of their low performing students so they do show up on the school's attendence rolls, and thus, their test scores are not held against them.

Teaching can be frustrating. No doubt. But educating all of the students is important, and NCLB has become a whipping boy that many special interets love blame for the lack of performance in schools. I think there are a lot worse things in schools than testing- poor administrators, bad teachers, transient student, lack of parental support, etc. All of those things have far more effect on schools than NCLB.

and I think that the fact that there are consequences for schools failing is VERY good. Public Schools should be reconstituted if they are not teaching students. If anything, NCLB gives school boards and administrators incentive to improve.