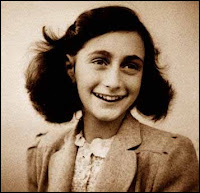 On Wednesday, they’re going to cut down Anne Frank’s tree. The 160 year old chestnut, whose branches and leaves provided Anne Frank, her family, and the van Pels a tiny sliver of the outside world during the years they hid in the cramped Annex rooms, is diseased and can't be saved. For Anne, who believed that the beauty of nature could soften nearly every woe, the tree was a lifeline.

"Nearly every morning I go to the attic to blow the stuffy air out of my lungs, from my favourite spot on the floor I look up at the blue sky and the bare chestnut tree, on whose branches little raindrops shine, appearing like silver, and at the seagulls and other birds as they glide on the wind. As long as this exists, I thought, and I may live to see it, this sunshine, the cloudless skies, while this lasts I cannot be unhappy." – February 23, 1944

I first met Anne in the spring of 1997, when Louise Uphoff asked me if I’d consider directing The Diary of Anne Frank in my senior year of high school. That summer, I found myself in Amsterdam, where I visited the Anne Frank House Museum. I didn’t know much of the story yet, but still I felt as though I were in a church as I moved through the annex, trying to imagine the lives of the people who had lived there. Most of the people around us shared our hushed tones, our somber reverence.

Later, because what was to be our school’s auditorium was still a hole in the ground, we staged the play off campus, in a tiny mini-theater which was located, for some reason, inside a corporate facility. That the theater was so cramped, that we had to build our set in the day before we opened, that we were in high school in a little farm town and couldn’t wait to get out – everything conspired to make the production feel incredibly true. And even though it was just a bunch of kids, many of whom I’d known since pre-school, even though I’d sat through endless hours of rehearsals in the choir room with them and run lines with them and scolded them when they weren’t off book quickly enough or forgot the blocking or ad-libbed in historically incorrect ways (our Mrs. Van Daan, instead of worrying about the Green Police, worried about the cops) – even so, I cried every night.

In the spring of 2000, Heather Moore invited me to speak to her eighth graders about Anne Frank when they were reading the play in their English class. I showed them pictures of the Secret Annex, passed around the program and pictures of the cast from our play, and tried to help them imagine what it would feel like to be locked inside a small space for more than two years – with your family, who, because you are thirteen, are so annoying, but you can’t even speak to tell them to leave you alone.

Also, no TV, no video games, no internet. No contact with the outside world except the radio at night and the people who risk their lives to bring you food. It’s nearly impossible to imagine, today.

In the spring of 2006, I read The Diary of Anne Frank(the play version) with my own students, seventh and eighth graders. They would get so deeply engrossed in the reading that they would literally groan when the bell rang. This almost never happens, in middle school. “You finally found something that we actually like reading!” they’d say. “Who are you, and where are my real students?” I’d ask.

The Diary of Anne Frank led us to amazing discussions of tolerance and hatred, of compassion and hope against all odds. We talked about the Holocaust and Hitler and bullying in our own school. We talked about Christianity and Judaism in a homogenous Christian culture. In every class, after we read the last lines of the play, there was a long moment of silence. (Which, again, almost NEVER happens in middle school.) Anne Frank felt like someone we knew. She felt a friend. My students were uniformly angry at the unfairness of her death. “How could they do that to her?” they asked. “How could that happen??”

People always say that Anne Frank is important because she put a face on the tragedy of the Holocaust, and there is, of course, something in that. However, I would argue that she also put a face on humanity, in our infinite capacity to hope in the face of cruelty and unimaginable tribulation. A few weeks before the Franks were arrested by the Nazis, Anne wrote: 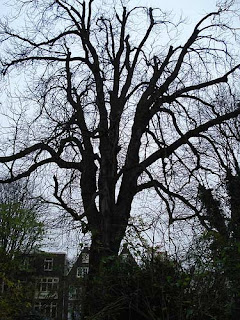 "It's really a wonder that I haven't dropped all my ideals, because they seem so absurd and impossible to carry out. Yet I keep them, because, in spite of everything I still believe that people are really good at heart. I simply can't build up my hopes on a foundation consisting of confusion, misery, and death. I see the world gradually being turned into a wilderness, I hear the ever-approaching thunder, which will destroy us too, I can feel the sufferings of millions and yet, if I look up into the heavens, I think that it will all come right, that this cruelty too will end, and that peace and tranquility will return again. . . ."

On Wednesday, they’ll cut down the tree that helped Anne Frank keep hoping, but already the Anne Frank Museum has taken grafts from the tree with which to regrow it. Though no one will be able to replace the exact tree, a new one will grow in its place, stretching its leaves to the same sky under the same sun, and a new generation of visitors will look to its crown to feel what Anne felt, to reassure themselves that despite everything, people are really good at heart.

She did put a face on the holocaust. For many, she made it personal, and real.

The sad thing is, it is only one person's story. Many more were killed, and each story was just as important.

My mother had me read The Diary of a Young Girl at age 10, before it was assigned to us in school only a year later, my mother understood that her child, this child, would be able to connect to Anne. That connection had not only to do with her extreme circumstances but also my seemingly extreme (early) adolescent emotions. It's silly I know, but I feel that I know Anne. I love Anne for what I know of her. I'm sorry the tree has to go. In an absurd way I feel like we are losing Anne just a little bit, again.

"our Mrs. Van Daan, instead of worrying about the Green Police, worried about the cops" Ah, Becky. I haven't thought of her in so long.

That play was an experience I'll never ever forget, and you were the one who handed me the opportunity of a life time. I will always love you for that.

It is amazing how much has changed in 10 years...