I first read Hamlet in my AP World Lit class, my junior year at OHS. 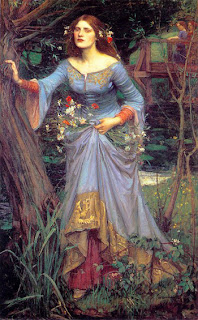 I was 16. Before that, I’d seen – and maybe I’m making this up, actually, but it sticks in my memory as truth – a claymation version of the play, on VHS, in a summer drama class. Am I making this up? Did someone make a claymation Hamlet? I imagine it was one of the animators who worked on, say, Rudolph the Red-Nosed Reindeer sitting at a bar in his early thirties, saying to his friends, “Fucking reindeer! This isn’t why I went into claymation, dudes. I want to make ART. I want to do something that MATTERS.” And his friends go, “Yeah, totally man.” And then he goes and makes a claymation version of Hamlet, because it, you know, really spoke to him.

In high school, when your teachers make you read Romeo & Juliet, they always try to get you to identify with the protagonists. “It’s the ultimate teenage story,” they tell you. Romeo and Juliet were teenagers just like you, and somehow your teachers think that means you’re going to be totally moved by the story of this chick who kills herself over some fifteen year old dude. But even when you’re fifteen, you realize that the boys around you aren’t really worth dying for. Updating your myspace page with sad songs and angsty poetry, maybe, but not KILLING yourself. Not for a lame teenage boy.

Hamlet though. Hamlet makes sense to teenagers. Here’s this dude who’s totally pissed off at his crappy parents, who wanders around the big cold castle wearing black and being sad and making fun of old people. And then he’s really mad all of a sudden, and then he’s sad again. He yells at his mother, he suddenly decides that his friends are jerks, he’s mean to his girlfriend without exactly knowing why. The ghost of his father says he should kill his uncle, and he probably should, because his uncle’s such a dick, you know? But at the same time – god, it’s like, how do you know what to do? Everything’s so HARD, and it’s just like, what’s the point? Maybe I should just kill myself! That would show them!

At fourteen, I wrote in my journal that it would be “fun” to go through a mental breakdown like Ophelia. (I grew up in a small town; we had to make fun in our own ways.) It would be “fun,” I wrote, to “start going to school with my hair not brushed and no shoes on and mismatched clothing and wander around the halls singing to myself and picking flowers and giving them to people and showing up for class once in a while… until I drown myself or get hit on the highway or something.” (Again, at fourteen, I had a limited experience of what “fun” looked like.)

Hamlet: Get thee to a nunnery. Why wouldst thou be a breeder of sinners? I am myself indifferent honest, but yet I could accuse me of such things---
Ophelia: [PUNCHES HIM THE FACE] Get a life, Hammie!
Hamlet: Are you honest? Are you fair?
Ophelia: I’m honestly over you! Hey Horatio, what are you doing tonight?

When we had to write papers about Hamlet, I wrote one arguing that Ophelia had a choice between staying in the life she had, pulled between the different men in her life, always answering to some dude or another; or going mad, choosing a different route, setting herself free. My teacher said, “Um, you can’t just CHOOSE to go mad, so this paper is inherently inarguable.” I thought she was wrong: after all, Hamlet chose to go mad. He was but mad north-northwest. He knew a hawk from a handsaw. Why couldn’t Ophelia? But, knowing from experience that you (or at least, I) couldn’t win an argument with “The Gravedigger,” I sat down the night before it was due and pounded out a perfectly fine paper arguing that Hamlet had never loved Ophelia. It was well argued and well written, but I hated to make the argument, because I never wanted to believe it myself. Of course Hamlet loved Ophelia. It wasn’t her fault that he was kind of a bad boyfriend, at the end.

Ophelia, of course, has become shorthand for all the girls who have been silenced over the years, all the women who have drowned in the weight of their own skirts. In various productions of Hamlet, I’ve seen her played sympathetically, and I’ve seen her played so goddamn passive you want to go down on stage and yank her around by the hair. Unfortunately, I’ve never seen her give Hamlet a well-aimed kick in the junk.

Imagine my delight, then, in Lisa Klein’s book Ophelia. 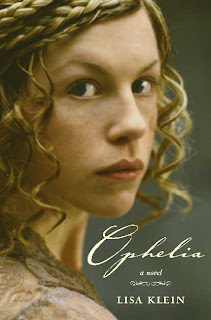 Klein, an English teacher, was always frustrated with Ophelia’s portrayal as a meek, wussy, crazy girl. She wanted to hear Ophelia’s voice. She wanted Ophelia to be more. (She probably wanted to see Ophelia kick Ham in the nuts, but as far as I know she hasn’t said so publicly.) “The film versions of the play… focus on her naiveté and madness. Well, if Ophelia was so dim,” Klein asks, “what on earth made Hamlet fall in love with her?” And so she wrote Ophelia’s story, winding it through with lines from the play, but beginning years before Bernardo and Francisco meet on the platform, and ending long after Fortinbras embraces his fortune.

In Klein’s version, Ophelia is far stronger than we ever see her in the play, taking control of her own fate and meeting the future head on. She is intelligent and quick-witted, and banters with Hamlet as cleverly as any character in Shakespeare’s empire. She defies the rules of the court, sneaking out of the castle dressed as a peasant to meet secretly with Hamlet. And she marries him, secretly, claiming him as her own for one whole, perfect day, before Horatio interrupts their wedding night calling “To the ramparts, Hamlet! It comes!”

The familiar plot unfolds quickly, and we see from Ophelia’s perspective the treachery of the king, and the fear and unrest at Elsinore. As the situation grows desperate, Ophelia must choose between saving her husband and saving herself, and in doing so, shows that she’s made of mettle far tougher than Shakespeare ever gave her credit.


“I held his head there and stroked it. I knew that I would break my unwilling promise to Hamlet. Like one who digs a tunnel beneath a fortress, I would undermine his revenge, not aid it. This game of love would distract him from his dire course.

Revenge was Hamlet’s plan; this was mine.”

This line made me LOL:"But even when you’re fifteen, you realize that the boys around you aren’t really worth dying for"

Ah-ha! I have never liked Ophelia, mostly because she if usually played as being so inherently weak, with a character solely propped up by the men around her. Ugh. It's always been the most frustrating part of the play which I otherwise can't get enough of. The only exception in my mind is probably Helena Bonham Carter - if anyone knows how to play a woman going mad, it's her.

What I still wonder about is why are the women in the comedies so much stronger than those in the tragedies? Compare Juliet (lovestruck ditz and leading lady of my least favorite of Shakespeare's plays) and Ophelia with the likes of Beatrice (my personal favorite but quite a bit older than the two teenage girls) or Kate or Roslyn. At least Lady Macbeth had it going on!

Ha! good times Molly. Not that i really played the actual Ophelia, even in Hamlet the vampire slayer, I think she should have been more tough.
On accounta that she is pretty awesome.