How to Write a Novel

1. Brainstorm. I’m a big fan of Mark Baechtel’s “Triple Cloud” exercise (find it in his book Shaping the Story). My current Work In Progress (also known as “my novel,” “the novel,” and “oh my god someone please kill me”) began as a triple cloud exercise in a seventh grade classroom. 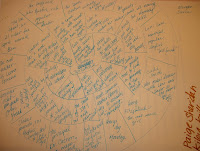 As a teacher, I almost always did the writing assignments along with the students, and in this case, I’m glad I did. From my initial triple cloud, I wrote some “starter scenes” in which the characters first began to tell their stories.

2. Outline. A lot of people will actually tell you NOT to outline, and if that works for you, cool. I learned the hard way (300 pages into an endless first novel, I realized I’d need at LEAST as many pages to finish it, and moreover that at least half of the 300 first pages were utterly unnecessary) that I am the kind of person who really needs a good outline. For my current WIP, 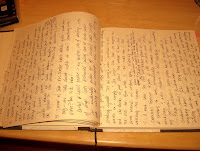 I sat down one day in April of 2005 and wrote a chapter-by-chapter breakdown of the entire first draft, figuring that each chapter would run about 10-15 pages. The original chapter outline is about 3,300 words, which is far more than I normally write in one sitting. In my memory, it’s sort of a blur: writing it was sort of like being possessed, almost like I wasn’t fully in control, but merely a conduit for the story. This was in New Mexico, where you can talk about things like being a conduit for a story without people judging.

3. Start writing! This will take you a long time. The first draft of my WIP took about six months to write, which is actually pretty impressive to me in retrospect. It helps to have something else that you don’t want to do (for me it was moving out of one house and into another. Doesn’t writing the first three chapters of a new novel sound WAY funner than packing a bunch of boring old boxes? It did to me!). It also helps to have no TV, no internet, no radio, no job, and no friends. Nothing to do but write that next chapter!

4. Make a writing schedule for yourself. I find that I can write about a chapter a week, once I get into the story. 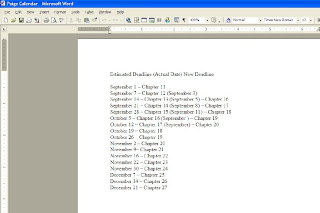 The first three or four chapters generally take me either much more or much less time to write than the bulk of chapters do. So, I recommend not making a schedule until you’re four or five chapters into it, and then holding yourself to a reasonable timeline.

5. Finish your rough draft & celebrate! Make people give you lots of kisses and attention. Finishing a novel is FAR more difficult than starting one.

6. Immediately start working on something entirely different, and ignore your novel for a while. Maybe you want to write some short stories, maybe you want to start your next novel, maybe it’s time to write a sonnet cycle about nascar. Whatever you do, give yourself at least a month away from your novel. (I took six, but I wouldn’t recommend it.)

7. After some time away, come back to your first draft and re-read it. You might want to print it out and put it in a binder! This way you will have the pleasure of writing all over your manuscript, 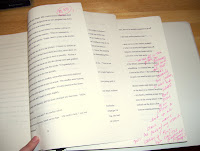 as well as a tangible sense of how much you’ve written. Also, three hundred pages in a binder makes a very satisfying smack against the wall if you feel the need to hurl it across the room. In this stage, you should pay close attention to the things about your manuscript that have been bugging you all along, the nagging little questions, and scenes you don’t really believe, the parts you’re completely horrified by (WHO WROTE THIS? DID MONKEYS TAKE OVER THIS CHAPTER?? OH MY GOD, IT’S SO AWFUL!). 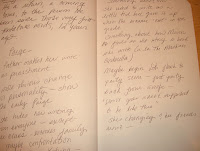 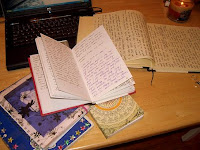 10. Get an agent. When you get to the point when you feel your manuscript is absolutely as good as you can make it on your own, write a kickass query letter and send it to a bunch of agents who represent the kind of work you’re doing. Pick an agent who really loves your work, and who wants to work with you on this and all future projects. It doesn’t hurt to pick an agent who will send you cute little drawings and presents to cheer you on, if you like that sort of thing (and I DO! Not only did my agent send me an adorable mug for xmas, she also offered to send me a new one when I told her the handle broke in the mail. I [heart] her).

11(a). If you are lucky, at this point your agent will sell your novel, and you will go into an editing process with your brand new editor! Yay! Have fun!

11(b). If you are lucky in a totally different kind of way (on a bad day, I call this kind of luck “cursed by the gods themselves,” but generally I understand that I am very lucky indeed), your agent will work with you to make your manuscript kick as much ass as possible, which means that you will get to do rewrites before an editor sees your ms. I know this sounds wretched, and it feels wretched to be in the middle of it, but ultimately your goal is to write the best book possible, and unfortunately…. it takes a lot of work.

13. Sell your novel! Hoooray! Get an editor! And….. do more re-writes. (Again: steps 7-9. Also, maybe find some sort of support group, because after five or seven or fourteen drafts of your novel, you will definitely start to become a Deeply Unhappy and Haunted Person, and you may be tempted to start drinking heavily.)

14. Finish your last re-write, check your proofs, make everyone give you lots of kisses and attention. And….

An excellent tutorial on the agony and ecstacy of writing! The images help illustrate the process, too, and it's interesting to see the genesis of the work. Also, it's great that this was a thorough and interesting piece written in the middle of the night...