In My Head, I'm Still Sixteen 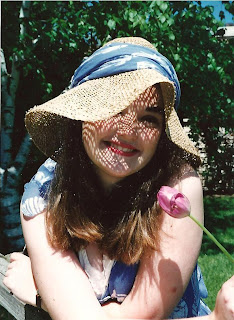 Over the weekend, I heard my cousin say that she would be eleven in March, and I kind of freaked out. I turned to her father and asked, “Is Anna really turning eleven this year?” He nodded.

Anna was the baby of the family until my (perfect, adorable, genius) niece Elodie was born last October. Her older brother is in high school, but that doesn’t freak me out as much as Anna turning eleven does, because he was born when I was in middle school, still a kid. Teaching middle school for the last five years pretty much resigned me to the idea that the children who were born when I was in seventh and eighth grade are now in middle and high school themselves. That’s cool. I’m okay with that.

What blows my mind is that I very clearly remember a time before Anna was born: Superbowl XXXI. The Packers were playing the Patriots, and everyone was gathered at grandma’s house to watch the game. Between plays, the conversation turned to What To Name The Baby. In the other room, I was filling out the paperwork to take the SAT and ACT tests. I remember stressing out about what schools I should list in the where-should-we-send-your-scores blanks. Later, my sister and I got in my red Renault Alliance and I drove us back to my mother’s house.

I told this little story to Anna’s father, and he nodded politely. He didn’t seem too shocked. “I was getting ready to take the ACTs when Anna was born!” I said. “I could already drive!!”

“I still have some of the clothes I was wearing then! How can it be eleven years ago??”

Dave seemed like he wished I would stop talking.

“This year is my ten year high school reunion, Dave!” I said. “Can you believe that?”

He was clearly unimpressed. Later, I realized that of COURSE he could believe it, that Molly being out of high school for ten years shocks no one but Molly. (Once at a Dar Williams concert, Dar said, “I think about myself a lot. The universe? Not so much.” Ali elbowed me in the stomach, hard, and laughed for about ten minutes. Funny, I said. I get it. After that, her motto for me was “Me? Lots. The universe? Not so much.”)

Sometime in the last ten years, I shifted into the adult category in my family. It probably happened when I lived in New Mexico, and it’s only surprising me now because I only got to see my family once or twice a year when I lived so far away, and didn’t have time to ponder shifting generational plates. Maybe I didn’t notice because I was too busy becoming an adult, or maybe it was the simple fact that inside my brain I still feel like I’m about sixteen – a smarter, more laid-back sixteen, but sixteen nonetheless. Who knows. But looking around the table on Sunday, it became very clear to me that I’m solidly in the “adult” category.

I remember one of my teachers in high school telling me that she still dreamed about her high school boyfriend sometimes. At the time, I think she was trying to explain to me that our first loves have major impacts on our brains, and that I wasn’t crazy for being so upset about breaking up with my first boyfriend. What I actually thought, at the time, was “You still remember your high school boyfriend? Didn’t you go to high school in, like, the GREAT DEPRESSION?”

Luckily, I kept my mouth shut.

Now I see that the teacher who counseled me probably felt that not only was she still dreaming about her high school boyfriend, but if she thought about it, she could still remember the exact fluttery, hollow, sinking feeling somewhere behind her sternum when he first kissed her. She could probably remember exactly how it felt to fall into that kiss, and she could probably remember it not in that hazy, overexposed photograph way you can remember flashes from your early childhood, but rather in the precise, cinematic way our brains hold on to significant moments. She probably felt like it hadn’t been so terribly long, after all, since she’d been my age.

I remember very clearly what it felt like to be in middle school, in high school, but I’ll also remember what it felt like to be here, to be in my late twenties and trying to interest people in how OLD I am. And when I’m in my mid-forties and Anna turns to me and says, “Can you believe it’s been ten years since I graduated from high school? I’m so OLD!” I’ll remember how it felt to be twenty-seven and marveling at your newly won adulthood, and I’ll nod sympathetically. “I know!” I’ll say. “That’s SO crazy!!”

And then I’ll go home and blog about how if Anna’s ten years out of high school, shoot, I must really be an adult. Even if I do still feel like I’m about sixteen.

In my head you will always be 16. Oh, the Renault.