Chalk, PTSD, and the Incredible Weirdness of Teaching, or: Why I Hate Mr. Holland

One day last year, I walked in to the school after a day at the district-wide spelling bee. 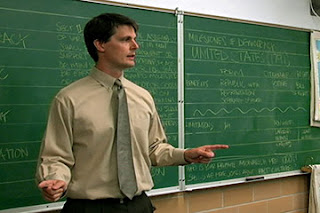 The school day wasn’t over yet, but I had a sub scheduled for the whole day, so my plan was to sneak past my classroom to the teacher’s lounge and use the rest of the afternoon to catch up on grading and paperwork. This plan was immediately thwarted when I pushed through the heavy front doors to find two of my most charming students racing each other down the hallway toward me. As soon as they saw me, they skidded to a stop, looking guilty. “Hi Ms. Backes!”

“Hello children,” I said politely. “And why exactly are you running down the hallway when you should be in my classroom right now?”

“The sub said we could! We have to go to the library!”

“We need a book to do the assignment!”

“That’s funny,” I said, “because I happen to know that the book you need for the assignment is the grammar textbook which you are currently holding in your hands, and of which I have forty copies in my classroom.”

The boys stuttered and fumbled, but ultimately gave in and followed me meekly back to my classroom, where I encountered a scene of such HORROR that I would still be having nightmares about it if I didn’t drink so heavily to forget. Children were in the hallways, screaming with laughter. (And I do mean screaming.) There were children writing on the board, throwing paper, chasing each other around the room, standing on tables, talking on cell phones, and doing pretty much everything in the world except identifying adverbial phrases. Meanwhile, the sub sat peacefully at my desk, knitting. In a cape.

In order to teach middle school successfully, you must develop a world-class poker face, which you will use to keep yourself from laughing when children fart audibly, or say things like “Tell him to stop playing with my balls!” Your poker face will keep you from rolling your eyes when your asinine co-worker gives you pedagogical suggestions involving spinners or beanies, and keep you from flipping out when the literature teacher has never heard of this T.S. Eliot fellow.

It will also hide your mortal fear when the children go wild.

You do the math of You vs. Them and realize, particularly if you’re teaching middle or high school, that the children are much bigger than you, and there are so many of them, and just one of you. When you come right down to it, what separates you from them, other than a valid driver’s license and the legal right to arm yourself? Thank god the kids don’t think this through, or you might be screwed. You turn your back on the class for one minute, and the next thing you know there’s a sow’s head on a pole, the conch shell is crushed, and Piggy’s lying dead under a boulder.

In your first years of teaching, you learn how to plan lessons, how to talk to parents, how to give good, helpful feedback on student papers, sure, but you also learn how to command respect. How to stare someone down. How to control a classroom of wound-up, hormonal teenagers. How to hide your pink underbelly. After a few years, these things come more easily, and you don’t have to think about them much. After a few years, you get to stop worrying so much about managing a classroom, and actually concentrate on teaching. It’s great!

And then you see a first-year teacher flopping around in front of a group of unimpressed students like a gasping fish on the beach, and it all comes back to you. The fear. The horror. The unfettered PTSD of your first years of teaching.


The faux-documentary Chalk captures this perfectly. 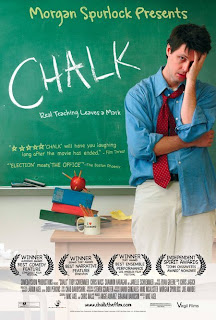 Written, directed by, and starring actors and improvisers who really were teachers, and featuring their former students and co-workers, Chalk is the truest movie about being a teacher I’ve ever seen. The film is to education what The Office is to Office-Monkery. It is just so, so true. And as is often the case, the truth can be extremely painful.

The first time I saw this film, in Madison’s snooty patooty Sundance Cinema, I had a tiny breakdown in the theater. The audience kept laughing at stupid little things, and I had to restrain myself from standing up and screaming “IT’S TRUE! THAT’S HOW IT IS!!” Next to me, my mother elbowed me and cackled. “Does this make you miss teaching?” I couldn’t even reply; I was too busy cringing. Chalk follows three teachers and an Assistant Principal in their first three years on the job. Mr. Stroope, in his third year, just wants to win Teacher of the Year, and doesn’t mind fighting dirty. Coach Webb, in her second year, believes that “students are what you make them think you think they are.” And Mr. Lowry, in his first year, is awkwardness embodied. Poor Mr. Lowry is just painful to watch. The worst thing about watching Mr. Lowry go through his first days and weeks of class is that it brings up all the memories of how terribly awful you were, in your first days and weeks as a teacher. You seriously hope that you weren’t as bad as he was… but you might have been. In this way, the film feels a little bit like watching a screening of your own geeky, pimply adolescence. At times, it actually hurts.

Chalk tells the truth about teaching in a way I’ve never seen another movie do. As a teacher, I always felt I was closer to Jack Black in School of Rock (“I’m hungover. Does anyone know what that means?” “It means you’re drunk?” “No, it means I was drunk YESTERDAY.”) than I was to Edward James Olmos in Stand and Deliver. In general, I kind of hate movies about inspiring teachers. Mr. Holland’s Opus, for example, made me want to stick wooden spoons down my throat just to get the wretched taste of precious spun sugar and inspirational sign-language dancing out of my mouth. The thing about teaching is that it’s only inspiring FROM A DISTANCE. You don’t realize how good and brilliant and noble your teachers are until you are far, far away from them. In the moment, in the day to day scuttle of school work and staff meetings and broken copy machines and standardized testing, teaching feels less like a Precious Moment and more like Platoon.

What those insipid inspirational teaching movies don’t get is that the bulk of teaching isn’t noble or inspired, it’s just absolutely ridiculous. It’s trying not to laugh at your students, it’s listening to your colleagues make snarky comments about what the parents wore to conferences, it’s explaining the difference between a kitty and a goat to children who really ought to know. It's sliding to the floor of your classroom after the last student leaves, and finally allowing yourself to cry. It’s hard and funny and trite and tiring and weird, and sometimes, sometimes, it's genuinely moving. It’s the whole spectrum of human drama, played out under florescent lights by a cast of adolescents… and the grownups they bring down to their level.

In this way, Chalk gets it exactly right.

That is the funniest (and saddest, and scariest, and most truthful) thing I've read in a long time. Been there! It's amazing how little the world knows about what really goes on in a classroom. When people tell me that teaching is "easy" I challenge them to take over a classroom for 10 minutes and see how they do.

I MUST see that movie, Chalk. How can I watch it? Is it out in theaters?

Thanks for the laugh (and cry).

Eve, thanks! It's on DVD and I saw it on the shelves at my local Blockbuster the other day. I actually picked up my own copy at Best Buy, I think, and if all else fails I'm sure you can snag a copy from their website: www.chalkthefilm.com