Merry Such and Such! 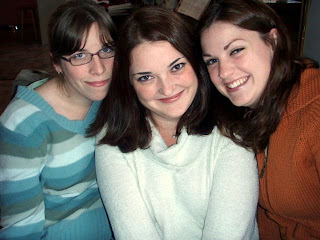 Back in Chicago after a whirlwind tour of central New Mexico and south central Wisconsin. Highlights include green chile dip and chips in New Mexico (midwestern comfort food is not nearly as comforting) and Rapture Mints in Wisconsin (for those of us left behind!) as well as smooches from FOURTEEN different pooches in the last eight days. (Including -- but not limited to -- four month old puppies a former student was driving around in a truck; a rescue dog with the exact same personality as Boo Radley, but without the opposable thumb necessary to stab anyone in the leg with a scissors; and a naughty freight train of a dog who barreled into my arm so hard that the next day I had a wide blue armband of a bruise that looked just like a tattoo and made me wonder whether I'd gotten a tattoo the night before, and if so, just how much had I drunk?)

Of course I also saw many of my favorite people in the world, including the woman who took my place at my old school and who "is so much like you that we don't even miss you, Molly!" (Thanks, I guess...!) and my friend Lisa who turns into the Pet Psychic when she drinks, and Rory who laughed at me when I punched him in the arm because it was such a pathetic punch ("You got SOFT!"), and my seeeester who has officially survived six months of living in Portland and who now hates hipsters with the wrath of all hellfire, and of course the Best Baby in the World, Miss Elodie Bean, who now says a number of words, most of which mean something along the lines of "Have you noticed that I am clearly the greatest baby who ever lived?" And yes, Elodie, we have.

Tonight my other favorite person in the universe, my partner in crime for nearly ten years, my college roommate who even when she didn't technically live with me often stayed the night just so we didn't have to stop giggling, the co-pilot of so many of my misadventures, the divine Miss Ali Brown, arrives for a week of hijinks and hilarity. Turkeys of Wisconsin beware.

NAUGHTY FREIGHT TRAIN OF A DOG!!!