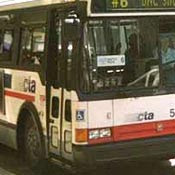 The bus driver’s voice is eager, persuasive: an old-timey circus vendor enticing you to pay the extra quarter to enter the tent of unimaginable wonders. He wants to sell you on each stop. The bus’s voice is stately and cool. The bus does not care where you get off.

Sometimes, in his eagerness to beat the bus at its own game, the bus driver actually calls out the name of the street a block or so away, just as we get to a stoplight. This morning, he got excited and started pimping Halsted when we were still two blocks away.

The driver was far too intense for a sleepy, slushy Tuesday morning. Everyone else on the bus was fighting to stay awake. The bus driver seemed to be fighting for his life.

Things were getting tense.

I started wondering if the bus driver was really trying to sell the big stops, or if he was actually just trying to mess with our minds. I imagined him getting farther and farther from reality:

The sad thing is that I know I would get confused. I’ve ridden this exact same route five times a week for five months, and yet if the bus driver started to yell out different streets as we approached my stop, I would start over-thinking it. Suddenly, it would be that moment on the SAT where you’re staring at a question that seems totally easy at first… but maybe that’s what they want you to think! Why would they put such an easy question on the SAT?....Unless it was to TRICK you? Is this the question that separates the men from the boys, the wheat from the chaff, mice from the motorcycles? Maybe only the truly discerning test-takers will see how completely easy this question is and realize it’s a TRICK and not be taken in by it!!

How far would my bus driver go? Even if we were clearly stopped at the exact spot on the sidewalk where I’ve stepped out of the bus nearly one hundred times, if the bus driver was yelling a different street name, I swear to god, I might not get off. I’d end up riding the bus up and down Armitage, on an endless lonely loop through the gray city.

Luckily, the driver usually seems to run out of steam as we approach my stop, and allows the bus to announce it for him. After four or five blocks of silence from him, I gave him the benefit of the doubt. He’s not trying to mess with my mind, I told myself. He’s a good guy. He just really likes these streets! He wants his passengers to like them as much as he does! That’s why he’s trying to sell them so exuberantly. He’s just a friendly bus driver. He would never play mind games with his passengers just to further his own alternate reality.

Full of beneficence, I stepped to the front door at my stop.
“Have a nice day,” I said sincerely.
“You too!” said the bus driver. “HAVE A GREAT MONDAY!”