One thing that I really love about living in Chicago is the wide range of humanity with which I interact every day. Albuquerque was a car culture, so I only really dealt with strangers by screaming obscenities at them on the freeway. Sometimes I’d share a moment with a stranger at the Walgreens or the gas station, but generally I interacted with so few strangers that even the crazy dude on the corner who wrote novels on pieces of cardboard and then stood them against a tree (“Hemingway,” we called him) started to feel like family. 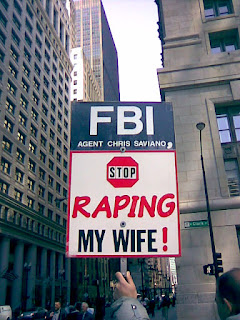 In Chicago, I get to interact with tons of strangers every day, on the streets, in the stores, on the CTA. (I especially love the man who stands at the corner of Daley Plaza with a giant sign that says “FBI STOP RAPING MY WIFE!”) Stranger watching has become a particular hobby of mine here, and nowhere is better for stranger watching than the morning bus ride.

This morning the bus was crowded and there were only three seats available. One, next to a giant sleeping dude who was taking up most of two seats, so really it was only like 1/8th of a seat. One was next to a snaggle-toothed old woman carrying two garbage bags full of cans. From experience, I know that she tends to be stinky. The third was next to a man reading. I chose him.

I made my way slowly down the aisle, settling myself carefully next to Reader Man, holding my purse on my lap.

Reader Man stared at me for two solid minutes.

I stared straight ahead, trying to pretend that I couldn’t feel his laser eyes on the side of my face. He stared, and I sighed and shifted my purse on my lap. “What a great morning!” I pretended to think. “Wow, I am so completely pleased with my life and comfortable with myself that I don’t even notice the dude staring at the side of my face!”

The light changed, the bus rumbled forward, and Reader Man finally stopped staring at me and went back to his book.

He read out loud.

At first, I couldn’t quite hear what he was saying, under the noise of the bus and the high school kids sitting behind me punching each other and joking about Ben Bernanke and sub-prime mortgages and predatory lending practices (actually, they were just calling each other fags, but a girl can dream). After a moment, though, the ambient noise settled and Reader Man’s voice came through.

“She stepped onto the bus,” he read, “and walked down the aisle. There weren’t many seats, so she took the first one available and sat gingerly on the edge of the seat.”

UM, WHAT? Reader Man’s novel sounded suspiciously familiar. I stared straight ahead, pretending not to listen. Pretending to think about puppies and happiness! I’m not listening to your crazy narrate-the-story-of-my-life novel, Reader Man!

“She set her purse on her lap and held onto it tightly.”

All right. This was weird. This was not okay. I started to think about Sarah Aswell’s Campaign Against Creeps on public transportation. Maybe I should say something? Maybe I should confront him, like “HEY. IT IS NOT OKAY TO NARRATE THE EVENTS OF MY LIFE IN A CREEPY WAY, DUDE.” I could be assertive. I could go there.

But then I thought about the bus ride last week, where I spent like ten blocks worrying about the guy behind me who was poking me in the back – was he trying to bug me? Hurt me? Flirt with me? Did he have a back fetish? A wool-coat-hood fetish? Should I turn around and confront him? – until I finally figured out that it was a freaking umbrella sticking out of the side of someone’s briefcase.

I thought, okay, Backes, you maybe have the sliiiiiightest tendency to overreact. Reader Man’s probably just enjoying a quality piece of literature that coincidentally reflects exactly what’s happening in your life right now.

“She was nervous. She had never ridden on a bus before.”

“Yes I have!” I thought indignantly.

The bus stopped at another light, and Reader Man turned to stare at the side of my face again. I clutched my purse more tightly and tried to think about puppies. When he started reading again, his story was lost under the teenaged boys hilariously monologuing about the Greenspan years (“Fag!” “You are!”).

When I began to make out Reader Man’s narrative once more, the story seemed to have changed. “Michelle looked around the great marble hall. This should be no problem! But where were the triplets?”

See, I told myself, Reader Man isn’t telling the Story of Molly Backes Going To Work at all! He’s reading an actual book, with actual characters. Just like the umbrella thing. No problem.

“‘Michelle!’ said Stephanie, ‘Where did those triplets go?’”

Wait – Michelle? Stephanie? Now I was the one staring at Reader Man. Or rather, at his book. What the hell was he reading?

The bus went around a corner, and Reader Man shifted his book slightly, just enough for me to catch the title at the top of the page. Full House Sisters! Babysitters & Company.

Reader Man wasn't reading the story of my life, he was reading a novelized version of that cheesiest of sitcoms, Full House. I swear to god.

And that is why I love living in Chicago.

That is a fantastic story.