Chicago Attempts to Woo Me With Winter 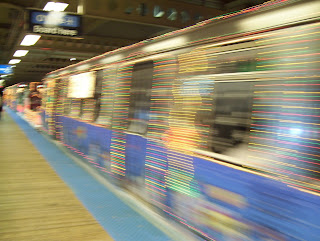 This weekend, Chicago did its best to make me love winter here… and then it shot itself in the foot by being rainy and snowy and gray and cold. (“Wintery,” you might say.) Still, I must admit that – even though I’d rather not leave my apartment, you know, EVER – winter in Chicago does have certain advantages.

1. When it’s snowy and rainy and spitty and cold outside, you have the perfect excuse to crawl into bed and watch all 300 minutes of the BBC’s Pride & Prejudice (wonderful) and – if it’s still snowing – go on to watch the
2005 Joe Wright version starring Keira Knightley (stupid). Next time it snows, we’re watching the Bollywood version -- if we can get a hold of it without leaving the apartment.

2. The CTA holiday train. Even though it came a half-hour later than the website said it would, it was worth it to see Santa riding on a flat car, if for no other reason than to feel even happier about going to Dan and Kelly’s extremely warm house for hot chocolate while poor Santa had to ride all the way to O’Hare. Also: free candy canes and a girl on the train who looked just like Ms. Kendra Young Harris. (Kendra, if that was you, sorry for assuming that a girl who looked just like you was not actually you.) (Also: nice to see you!)

4. The reemergence of George Wintson’s December, which has been my favorite snowy winter night album since high school. Somehow, it lost something in New Mexico (which lacks the Midwest’s snow, cold, bleak winter depression…), but back in the Midwest, I find that this album hasn’t lost its ability to transform my winter days from Ethan Frome to The Polar Express.

5. Something about the lack of sunlight triggers a deep, genetic need to bake. Yesterday I made oatmeal eggnog cookies (my own invention), and they were delicious. Luckily, I had the good folks at veryclever.org to help me eat them. 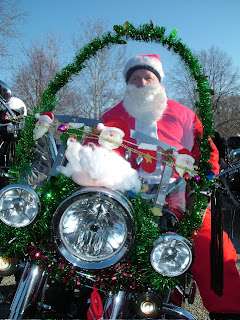 6. Holiday fun without leaving the house! The Toys for Tots Motorcycle Parade went right under my front windows yesterday. Nothing says Christmas like Santa on a hog.

7. Dog coats! When it’s 25 degrees (as it is now), doggy sweaters and coats aren’t just fashion statements, they’re life savers. Luckily, my desk affords me a fantastic view of the doggy runway, as the fashionable dogs of Lincoln Park brave the chilly morning in their valiant efforts to bark at every squirrel and pee on every bench in the greater Chicago area. 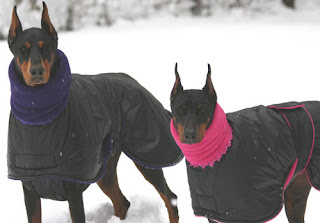 8. Speaking of dog coats, how in the world did this escape my attention? Snoop Dogg’s New Clothing Line -- because what dog doesn’t need a “Dogg Father” sweater?

9. The George Drake Players, Chicago’s Grinnell Alumni improv team, have three shows at The Playground. If you can’t make it tonight, come out Monday the 10th or the 17th for the sort of highbrow improv comedy that only a bunch of real nerds can provide.

10. This morning on the way to work, I stared out the gray windows of the Armitage bus and thought about how much easier my life would be if I had magical powers. Specifically, how much easier parking would be. I could shrink my truck so it fit between two parked cars, a la the headquarters of the Order of the Phoenix. Or I could shrink the truck to the size of a matchbox truck, and then carry it around in my pocket until I needed it. That way, I wouldn’t have to worry about alternate side parking, snow routes, getting plowed in, etc etc.

Then I thought, wait, if I had magical powers, I probably wouldn’t need a truck at all.

Then I spent the rest of my commute trying to raise my internal bar for magical powers. (My students used to tease me about my lame hypothetical uses of magic.) If I had magical powers, I wouldn’t need to be commuting to work at all! I’d make the phones stop ringing for the whole afternoon! Hog parades every day! Every train would be covered with lights, and the reindeer would all be wearing Dogg Father hoodies!

I’ve heard that Chicago can be quite magical during the holidays, and I am all ready for it. If it can amp up the cuteness in the coming weeks, it *might* just have a chance of winning my heart. Maybe. So bring on the magic, Chicago, holiday or otherwise. And while you’re at it, turn up the heat and bring back that big pretty yellow circle thing in the sky…. I seem to remember it was rather nice….