The other day, N. posted a thing on the Chicago Improv Network’s community message board, asking for local doctor recommendations. “Does anyone know or love a doctor?” she asked. 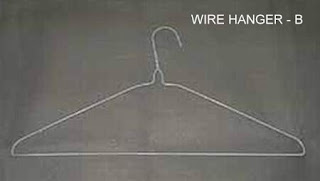 One of the first replies she got was a picture of a wire hanger, with the line “Let me know if you need my shop vac” beneath it. Later, after a post chiding Mr. Hanger for his poor taste, someone defended him with “The only reason a woman would be looking for a doctor is because none of her friends would give her a quickie abortion. [Hanger] is just saying what we're all thinking.”

Okay, thank you, Joint Chiefs of the Committee on Demeaning Women, for seeking out extra opportunities to be offensive and crude. Not only is this kind of thing threatening and mean-spirited, it’s also completely unfunny. Chicago’s improv theaters teach you to “play at the top of your intelligence,” and to seek the humor in realistic, human situations, knowing that the funniest moments are those that tell the truth. The Chicago improv scene tends to frown upon selling the scene out for a joke, going blue because you can’t think of anything else, and going for shock value in the hopes that if you can’t make an audience laugh, at least you can make them incredibly uncomfortable. The hanger bit is everything Chicago improvisers strive NOT to be.

What’s interesting about this incident is the way my women friends reacted to it. As one of the few female improvisers in a field largely dominated by men, N didn’t want to react honestly (enraged, threatened, uncomfortable as hell) at the risk of being dismissed as “another angry feminist” and instead replied with a joke, first heightening the abortion thing and then throwing in a jab about what an idiot Mr. Hanger is. Understandable, given her position. Nevertheless, going for the joke didn’t resolve her feelings of being demeaned and generally creeped out by such nasty, offensive responses to a perfectly innocent question about medical care.

So. I went to my articulate, strong, awesome girl friends and asked for help in replying to these humorless dudes and letting them know that they’re being gross, offensive, and mean. Most of my girls said, Well, the post enrages me, but I don’t know what to say that won’t be dismissed as uninteresting and typical anger from another pissed off feminist.

Okay, I said, but just because you think you’ll be dismissed or ignored, does that mean you shouldn’t say anything in the first place? Should you allow the (potential, imagined – but not uncommon) reactions to your opinions silence you? Merely because you’re so tired of being called (with an eye-roll and a sigh) an angry feminist? (Or my favorite, a “feminazi”? How charming of Rush Limbaugh to popularize a portmanteau that compares women who’d like to be treated as equals to people who systematically oppressed and then murdered a number of minority groups, including – oh, irony – German feminists. Thanks, Rush!)

Eventually I posted something myself, saying essentially what I said above. Another friend posted as well, in her charmingly subtle way, and then posted a real doctor rec as well. Case closed.

Except… the same day, there was an article in the Chicago Sun-Times about the term “Ms,” reaching the conclusion that the term has become mainstream and no longer carries any connotation as a feminist label. To support this claim, they interviewed several women who go by “Ms” but are “by no means a feminist”! I mean, heaven forbid!

"I wouldn't consider myself a feminist," says Ms. Jennifer Hoppenrath, who lives in Wicker Park. "I feel many of the battles feminists were fighting for have been won, at least here in the United States."

Have they, Jennifer? When a woman can’t even post a simple request for a doctor recommendation without some jerk insinuating that the “only reason a woman's asking for a doctor rec is because none of her friends will do a quickie abortion for her”? When the gender wage gap is actually growing? When the glass ceiling is “almost impenetrable”? When women have to worry about their physical safety walking the dog, driving on the highway, or walking into their homes?

Should women know better than to walk a half block alone at night? Probably. Should we have to know better? Absolutely not. No more than the average man should.

My generation of women grew up being told that we could grow up to be anything we want to, “even the President!” Maybe this is true; we’ll see how Ms. Clinton does. Maybe we can do whatever we want, as long as we don’t mind getting paid $0.75 for every dollar men get to do it.

After all, it wasn’t until college that Ali and I began questioning the things we’d been told as girls. We never considered the fact that maybe our mothers’ generation of feminists didn’t fix everything… until we encountered, first hand, the things that were still broken. Until we had to decide what to do when dudes made jokes about hangers and shop vacs when we asked for doctor recommendations. Until we had to decide whether or not to speak up, speak out, even if it meant being called “angry feminists.”

Most of the time, we spoke up. But not always. It gets tiring, hearing people dismiss you as a militant man-hater. It probably gets tiring for the people making sexist jokes, too, always being called out on their bullshit. And I understand why you wouldn’t want to go to bat against yet another example of sexist, misogynistic, pathetic attempt at humor. I get why you’d be too tired, too discouraged, too afraid of being labeled or misunderstood.

But I hope you speak up sometimes.


And Jennifer? For the record, if you believe in, support, look fondly on, hope for, and/or work towards equality of the sexes, you are a feminist.

You should send this to the tribune. More people need to read this!

i'm proud to be a feminist. Always have been, always will be. F that guy and his stupid comment.

these situations are always tough - you want to prove that you can, as a woman, take a joke and dish one back. But at the same time, you know that these dudes probably don't know the shit you've been through or how they are making you feel.

part of it seems unfair -- i joke about abortion, women's rights, feminism, to heal. they do it because it's the easy laugh line. i just want to throw some humor-bible at them.

i guess the good news is that, as we move forward, i think we are making progress (just not as quickly as most men think).

that comment was disgusting. i agree, it seems like some jerk saw a quick funny at the expense of someone else and acted upon it.

you say the following: "The Chicago improv scene tends to frown upon selling the scene out for a joke, going blue because you can’t think of anything else, and going for shock value in the hopes that if you can’t make an audience laugh, at least you can make them incredibly uncomfortable."

While I think the chicago improv scene does frown upon the above, it's something that is more often preached and rarely practiced. and more unfortunate, going blue and/or going for the joke, etc, more often than not gets a response from the audience that perpetuates this improv-reaction.

of course, few are unsullied. been there done that myself, although I feel cheap - rather than congratulatory - afterwards.