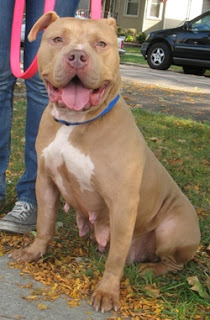 First of all, and most importantly, I met this dog over the weekend. If we’d been living in a pets-okay place, this dog would now be a part of my family. You probably know that I fall all over most dogs I meet, but this dog was special. She has SUCH a sweet personality, and seemed very person-oriented, which is especially amazing considering she was recently rescued from a neglect situation. She recently had a litter of puppies, hence the saggy nips, and she's such a sweetheart that NewLeash made an exception to their no-pit-puppies rule, assuming that the babies would be as even tempered as the mama. Also, she has very soft fur and a big broad pumpkin face, and when I saw her she gave me some kisses in my palm.

Please, someone go adopt this dog, and call me when you do so I can come over to your house and pet her pretty pumpkin head every day.

In other news, Saturday’s “Bittersweet Brood” sparked some interesting follow-up conversation, which you can read here and here. Regardless of your personal feelings about the increasing “populism of the arts,” and whether it will serve to unite or isolate us, it does seem that there will always be interest in the process of writing and the mind, habits, and lives of writers, even if we don’t actually want to do the work of writing ourselves. Look for another conversation with Sarah next Saturday.

Speaking of the process of writing, I recently re-read two books on the subject, Betsy Lerner’s The Forest for the Trees and Stephen King’s On Writing. Interestingly, I found Lerner’s book

more useful than I did the first time I read it, in 2002; I remember getting stuck on a paragraph that talked about people growing out of writing after college, and having a little meltdown. (“Most people, even those who wrote as children or showed promise as teens, usually give up shortly after college. Writing, like drugs and recreational sex, becomes an activity associated with youth.”) Yikes! I had just graduated from college – was I going to give up writing? I realized, for the first time, that writing was something I could lose, could walk away from, could let go. Until that point I’d congratulated myself on every journal filled, every writing anniversary passed, thinking that after some number of pages or years I would be a writer forever. I’d been writing for five years, seven years, filled 20 journals, 27, 30….but I had played the violin for ten years and walked away from it. What was to say I wouldn’t do the same with writing?

That existential crisis soured the book for me then. Re-reading it now, I found it to be interesting and illuminating. Lerner spent years as an editor, and writes at length about the editor-author relationship as well as the business of publishing, two subjects that are very mysterious to the outsider. 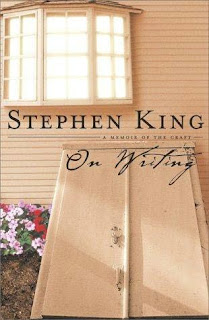 King’s book, on the other hand, while a quick and fun read, was less useful to me this time around. His advice tends toward the “Use straightforward dialogue tags, don’t use too many adjectives, kill your darlings” kind, which though very useful for beginners, isn’t too interesting to me now. The book itself is entertaining for the personal anecdotes and language alone, and at the end he talks about the accident that nearly killed him. Read it as sort of a memoir with some tips for rookie writers, but if you already know not to over-use stupid dialogue tags, don’t expect it to revolutionize your writing life.

And finally… the lovely and talented Miss Elodie 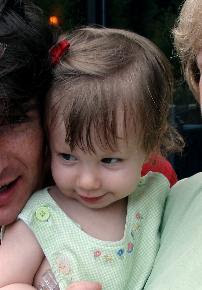 has joined the ranks of the walking. According to her mother, Elodie can take eight whole steps before she falls on her head. Congratulations, Elodie! And enjoy this period of your life when the simplest achievements earn you fabulous praise. Nobody congratulates you on walking when you’re almost thirty. Though if you ask for them, you can sometimes still get complements on your socks.

Zeke CANNOT believe that you fell in love with another dog. There IS no dog but Zeke!

I want the dog, I want the dog!!!! I have just a slight obsession with pit bulls and proving people wrong about their supposed "vicious" nature. I would love, love, love to adopt that dog to give my pit, Shae, a playmate, however I think I live a little too far away....