Whenever I get asked this – not a lot, but enough – I get embarrassed. I don’t want to come off as self-righteous or pretentious; I’m not a card-carrying TV atheist. 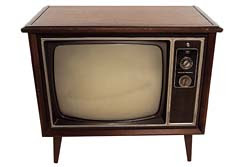 I love my cell phone and I have a deeply meaningful relationship with my laptop. I just… don’t have a TV. I never have. Of course, I’ve lived in houses with TVs, grew up with TVs, am not opposed to watching TV when it’s convenient, but I’ve never personally owned a TV, and I really see no need to in the future. (When I moved to Chicago, my father practically begged me to let him give us one of his extra TVs. He didn’t understand how I could be okay without one. I love him and I generally let him give me trinkets that he thinks will improve my life, over the door hangers and night lights and rubber bands, but I wouldn’t take the TV.)

Yesterday, Laurie Halse Anderson posted a blog entry about TV. Specifically, she says that writers should turn off the television.

“Some people see their television and movie-watching as a critical part of becoming better writers. They feel that the exposure to Story structure (Plot A, Plot B, Plot C, character arcs intersecting, etc.) that they get out of watching well-written shows helps their writing. I've had folks argue with me that they must watch TV to write books and write them well enough to be published.”

She goes on to say that she disagrees with this, that the only way to become a better writer is to read books. (I would add: and to write!)

On one hand, this is pretty straightforward, good advice. I don’t know about you, but TV really makes me dumb. For me, TV has always been a sort of pacifier, something to soothe me, to shut out the world, and keep me from thinking too hard. Kurt Vonnegut said, “What passes for culture in my head is really a bunch of commercials.” Last year, I lived in a house with like six TVs (though only three or four of them actually worked) and I found myself engaged in such noble pursuits as rushing home to catch two full episodes of “Kate and Ally” and hotly debating which team had a better chance to become the Ultimate Coyote Ugly Girls. I really wasn’t writing much at all. 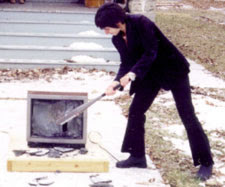 So yeah, absolutely. Turn off the TV, sell it on Craigslist, chuck it out the window.

But. I must say, in the sake of fairness, that the person who taught me how to plot was an avid TV watcher. He claimed to have learned everything he knew about plot from watching tons of TV as a teenager and young adult. Granted, this person was the kind of freaky genius who learned from nearly every experience, and who was reading Nietzche at fourteen, so maybe he’s the exception to the rule. I know also that he’d read some “How to Write Your Screenplay” books before we worked together, and maybe reading them taught him more about plot than watching TV did, but he always credited his understanding of plot to watching TV. (Of course you don’t need TV to learn about plot. When I think of plot, I think of Romeo & Juliet. Its tragedy is its inevitability.)

On the other hand, Mr. I-Learned-Plot-From-TV’s characterization skills were a lot weaker, which perhaps supports Laurie Halse Anderson’s claims after all:

I see a consistent weakness in the writing of young people and writers who don't read much. They fumble with narrative description. They are great at dialog and they often get the bones of their story laid out well. But the actual description of scene action, setting, the observation of small details which reflect the emotional journey of the character - all that stuff is not up to snuff.

Her observations are consistent with what I’ve seen of young writers, as well. However, N. and I were just talking about how some shows are all character and relationship, with very little plot. That one Cosby episode where there’s a snake in the basement? All character, and it’s absolutely charming. What makes it sparkle is watching each well-drawn character react to the problem of a snake in the basement. The analytical watcher could learn about character from a show like that, but you could probably learn just as much by watching your family talk to one another over dinner.

Then there’s the question of culture. TV saturates our culture. It’s in the doctor’s offices, the restaurants, the salons…. “To tivo” is a common verb. Sweeps week passes for news in even the most legitimate newspapers. Sometimes I wonder if what we call culture isn’t being replaced by what TV writers call culture. As a writer, it’s your job to stand apart, witness the world, and then tell about it. Can you tell the truth about our culture if you don’t watch TV? Are you too far outside without one?

The moral of the story is… I guess I don’t know. I’m a little surprised that I’m debating this with myself at all, when a few years ago I would have said, 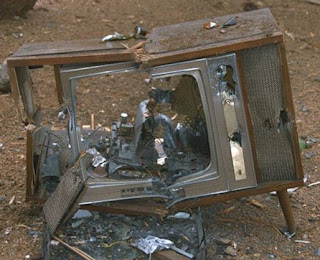 absolutely, get rid of your TV if you want to be a writer. Read more books and write more stories and stop watching the antics of those wacky Keatons. But now…maybe I’ve just lost the militant certainty of youth, or maybe I’m just loathe to be prescriptive in anything when my own life is so up in the air. Maybe I still haven’t gotten over that one commercial where the sad TVs look to the sky. (What passes for culture…)

What do you think? Kill the TV or learn from it? Study dialogue and character on your favorite shows, or on the bus ride home? Watch to join the culture, or turn it off to tell?

This is a tough call. I've been enjoying the hell out of How I Met Your Mother (because Nick's college friends produce it, and they're good storytellers), Carnivale, CSI: Miami (you know me, a sucker for dead people and science)and Dr. Who (again, with the storytelling). But on the other hand, I've been writing less.

So I advocate balance. Learn from TV after you've written words for the day, not before.

Dr. Nick's solution for November? He'll watch lots of football, which will repel me away from the tv wid a quickness.

seriously, though, i love tv. good tv, bad tv, sports, food, my dear, precious oprah... why would i stop myself from being exposed to more shit? as long as i write enough, i don't see it as a waste of time.

You can't learn to play the guitar just by listening to the radio.

Likewise, you can't learn everything from the GD TV. Especially how to write. I think this culture justifys wasting their time by sitting in front of the tube.

Of course, one should always know what's 'out there' - and should "expose themselves to more shit". But you can be exposed to everything in the world and not be a good writer.

If you think I read a lot (and for those who don't know me, trust me, I do), you should see the amount of TV I watch.

My TiVo is always full and my Netflix queue is full of TV shows. Mmmm... TV. I don't think it makes me a better or worse writer. It's something I enjoy and it entertains me and I can share it with other people.

Yes, I can debate books with people, but the actual reading of the book is a solitary experience. Viewing a show together means everyone on the couch is laughing hysterically when The Office starts singing "Closer to Fine."

To TV or not to TV is up to the person. You know what works for you. You know what doesn't. If you don't TV, you won't get my super-hilarious Family Guy one-liners, but you could probably live without that, right?

Personally, I think it is up to the individual. TV can be like anything: a tool or a hindrance. If a person is prone to addiction, then steps should be taken to recognize what is useful and what can be downright damaging by watching tv... Unfortunately, there is so, so, so much crap on modern television, it's not near as helpful a medium as it used to be, (particularly "reality" and game shows. There isn't as much quality writing going on as there used to be). I would recommend EXTREME moderation... a television (particularly if used to watch films...good films) can be used to enhance writing, because, just as watching the folks on the bus, you are exposed to a variety of styles, ideas, and substance (both good and bad). I would definitely, however, recommend a solid background in actual literature to offset the garbage.
And it was only 4 tvs with 3 working.

i advocate for everything in moderation. i am a huge tv junkie, so i am biased, but i find that pop culture informs a lot of what i do (in whatever medium i happen to be working) and tv is a key to pop culture. i think to say one can learn structure and plot from tv is true, but i don't think it's the only place to learn it and getting a tv just for that reason alone is unnecessary. however, i do think tv serves as a means of connecting a huge amount of the population and getting them all on the same page (for better or for worse). and while good television rocks, i agree with rory, it is few and far between and there's a lot of crap out there.

I don't own a TV, but of late I've discovered that many of my favorite network addictions are free on the network sites. So I'm back to watching a few shows a week.

I, too, cringe inwardly when I am "forced"-ish to reveal that I don't have a TV. People automatically think I'm trying to show off. I just know that I get sucked in by the sucker, and it's best I stay away.

That being said, I do like the pacifier effect of the TV sometimes. I live alone, work alone, eat alone and sleep alone. Sometimes it's nice to have company.