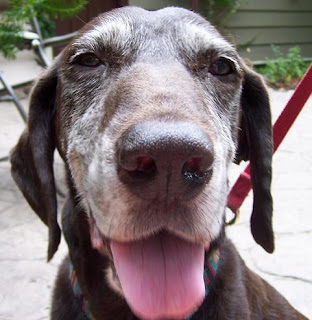 When I got home from work yesterday, 15 year old Zeke was not at the back door to greet me. About half of the time he seems to hear the car or otherwise sense that I will be opening the door and is there waiting. I let Basil out of his crate and went to tell Zeke that it was time for a walk. When I left the house nine hours earlier, Zeke was sleeping peacefully on the couch, but he was not on either the couch or the loveseat. I went upstairs to look for him on his bed and he was not there either! I did a frantic search of the entire house, including the closed bedrooms and closets, under beds and in hidden corners and Zeke was no where to be found! I thought maybe Molly had been homesick and had driven up and taken him for a walk but that didn't make any sense. Then I (seriously!) thought that Zeke had died while I was gone and the creatures from his planet had landed in the back yard and retrieved the body of their king to take back home.

Finally, I went to the basement and found Zeke disoriented, sleeping on a pile of dirty laundry. I do not believe that he has ever been in the basement before, and I can't even imagine how difficult it would have been for him to make it down the cement stairs when he has such difficulty with the carpeted ones. I don't know if he went looking for a quiet place to die or he got lost looking for cheese. He was unable to climb up the stairs by himself so I carried him up. Once he was back in the kitchen he started bugling his moose call and jumping in the excitement of being readied for a walk, all thoughts of demise banished, for now.