Animals I Have Known: My Friend the Burro

In the two weeks since I last posted, this blog has gotten as many hits as it had previously gotten over the course of its entire eight-year existence. Normally, I get maybe 250 views of each entry. “How to be a Writer” has had 100 times that. I’m gratified and overwhelmed by the response, and eventually I think I’ll have more to say about the subject -- both the strangeness of viralocity, and some thoughts about why this post in particular has been so popular. 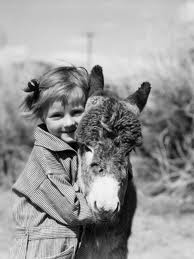 For now though, I’m going to go ahead with the post I’d originally planned to run next. I told this story to my friend Claire recently, and she told me that I should write mini-stories about the (many, many) animals in my life. Seeing as how she’s a fancy professional blogger for WBEZ, I figure I should probably follow her advice. Plus, it gives me an excuse to post pictures of adorable animals. Everyone wins!

Animals I Have Known: My Friend the Burro

I was lonely in high school. I suspect most of us were, though of course at the time I assumed everyone else was hanging out with friends and having meaningful, amazing adventures while I was sitting alone in my bedroom listening to Sarah McLachlan and drawing on my Converse All-Stars. I spent a lot of time driving around in my car (an awesome Renault Alliance), smoking cigarettes and listening to music. For the most part, I stuck to the country roads, which rose and curved and branched in beautiful and surprising ways. I constantly sought new routes – a back way to my boyfriend’s house, a “secret” way to get home that went past an abandoned farmhouse and under an interesting viaduct. I liked the roads that took me farthest from town, where the moon glowed white on autumn cornstalks and the sky was thick with stars.

One day during my junior year, as I was meandering through the countryside, delaying for a few more miles the moment when I’d finally have to give in and go home to my parents, I saw him. It was dusk, and the sun was setting over the fields, leaving everything golden in its wake.

He stood in a little field on a corner lot, stretching his neck to reach the tall grass on the other side of the barbed wire fence. His coat was russet brown in the light. 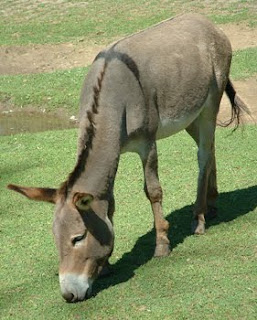 I loved him instantly.

A few days later, I drove the same road and saw him again. He was standing in his little field, enjoying the sunshine. This time, I pulled my car over to the side of the road and walked up to his fence (a treacherous endeavor, as there was quite a deep ditch between the road and the fence). “Hi donkey,” I said. “Hi little burro.”

My grandparents lived in southern New Mexico when I was very small, and according to my grandfather, they’d actually owned miniature burros while there. (This may not actually be true. In fact, I’m guessing that it’s probably not. My family’s stories often veer into fictional territory, such as the time my father told me that my great-grandmother was part Native American. I was really excited to investigate my newfound Native Heritage until I asked my mother. “Your great-grandmother had an INDIAN PONY,” she said. “But she was NOT AN INDIAN.”)

In any case, even though they’d moved back to the Midwest shortly after I was born, my grandparents loved New Mexico and kept souvenirs around the house, including a large stuffed burro who slept on top of the quilt in the very center of their bed.

Which is to say that I was predisposed to love this burro – my own burro in Wisconsin – even before I learned to tempt him toward the fence with offerings of the long grass that grew just beyond his reach. In the afternoon light, his fur was a warm gray with a long black stripe running down his back. His ears were long and tipped with black. Though he was quite dusty, his fur was soft, particularly on his cheeks and just behind his ears. “If you were mine, I’d brush you every day,” I told him.

He nosed my hands, searching for more treats.

“I’ll call you Esperanzo,” I said, attempting to roll the R in my best Wisconsin-high-school-Spanish accent.

I visited him as often as I could, usually on afternoons when school had been particularly difficult. He came to know my car, and would trot over to the fence as soon as he saw me pulling over to the side of the road. I would scratch his neck, stroke his long soft ears, and kiss his cheeks. He would lay his head over my shoulder and allow me to hug him around the neck. Sometimes I would bring him carrots or apples, but he’d lay his head across my shoulder even on the days when I didn’t bring him anything at all.

Esperanzo was my sanctuary that year, my secret. Some days I’d drive past his field and he wouldn’t be there. He had a little shed in the far corner of his lot, in a grove of trees a ways from the road. Sometimes I would stop anyway, make the treacherous hike to his fence, and attempt to call him out of his shed and down to the fence to visit. Occasionally it worked, but more often I’d be left hanging, standing by the fence and feeling foolish. A few times, I tried petting the horse who lived on the farm down the road as a substitute, but he wouldn’t hug me like Esperanzo would, and his ears flicked too nervously for me to pet them.

I saw him less over the winter, but once the weather warmed he was back, grazing on the first shoots of grass. He remembered me, and came to the fence to lay his head across my shoulder and let me hug him around his neck. “Esperanzo,” I whispered in his long soft ears, attempting to roll my R.

One afternoon in May, Esperanzo was eating baby carrots out of my hand when a man appeared in his field. Esperanzo’s owner, I assumed, though I’d been thinking of him as my burro for so long that it was strange to be reminded that he wasn’t actually mine. “Hi,” I said awkwardly.

You have the gentlest, sweetest burro in the whole world, and you named him JAKE? Jake is a fat yellow lab. Jake is a mean boy in eighth grade study hall. Jake is a snake!

Yay! I'm tempted to say "You HAVE a good little ass" as long as you know I only mean it in a purely objectifying way.

I don't suppose you know how much burros go for these days? Apparently I'm expected to buy one.

I remember Jake! And the Renault...like it was yesterday.