If your average college band concert and Cirque du Soleil ate a bunch of Wisconsin brats and then got completely piss-drunk on Capital Brewery Wisconsin Amber at the Ice Capades, the UW Varsity Band Spring Concert would be their cheese-curd loving beer-soaked streamer throwing pyrotechnical Love Baby. On crack.

But I’m getting ahead of myself.

I grew up in Wisconsin, just outside of Madison, which means that I spent many a crisp fall day in the 1980s and 1990s at Camp Randall Stadium with my dad. (Incidentally, I was there at the October 30, 1993 Michigan game, but I wasn’t crushed. Badger fans know what I mean.) Of course, it also means that I spent many a fifth quarter polka-ing to the Bud Song (“When you say WIS-CON-SIN, you’ve said it all!”), doing the chicken dance, and waving my arms to “Varsity,” all in the stands of Camp Randall, all with my dad and thousands of other Badger fans.

And yes, I know all the words to the song, “If You Want to Be a Badger (Just Come Along with Me).”

I realize that this may come as a surprise to those of you who know me well. After all, I’m the girl who tried to console a boyfriend watching his hockey team lose in the last two minutes of the third period, “Well, they could still win! They have a whole nother quarter to play still!”

It may come as even MORE of a surprise that I love Badger games. Love them. I love tailgating before hand, even when it’s freezing cold and you have to hold your brat in gloved hands and eat it fast before your sauerkraut gets icy. I love eating peanuts in the stands and dropping the shells into the hoods of the people sitting in front of me. And I love love LOVE doing the polka and the chicken dance in the bleachers and pretending I know the words to “Varsity.”

So, when I got the offer of free tickets to the UW Varsity Band Spring Concert this year, I jumped at it. Okay, to be honest, I probably – no, almost SURELY – wouldn’t have gone if one of the two Featured Guest Soloists hadn’t been my BFF Nat. But he was, and he got me tickets, and naturally I felt like the best person – indeed, the ONLY person – to be my date to a Badger Band concert at the Kohl Center was my chicken-dancing, polka-ing, Bud-song singing Mega-Badger-Fan Dad. Yes, I spent my weekend going to a band concert with my dad. Yes, I am awesome.

I didn’t really know what to expect. For one thing, I’d never been to the Kohl Center before – in my mind, it had only recently opened. Turns out it opened ten years ago. Well, I feel old. Anyway, it’s giant, and of course before the show there were like 10,000 people milling around outside as I tried to figure out a) where to pick up our tickets, b) where to find my dad, and c) wait, ten years? Really? I had a couple of cell phone conversations of the most annoying kind with my father (“Where are you? I’m standing by the C gate. Where are you?”) and finally put my foot down and announced that I wasn’t moving and he would just have to find ME when none other than Nat McIntosh himself walked right past me, carrying a (an?) euphonium. So of course I freaked out a little and jumped up and down and he said something about a Jumbotron and all of a sudden I GOT IT, I got that he was playing this huge giant solo concert for the 10,000 people milling around the Kohl Center, and I would have gotten shy but he was running late so I just hugged him good luck and waited for my father.

Our seats were way at the top of the first level of the Kohl Center, which provided a pretty good view of the huge giant space. We settled into our uncomfortable chairs, talked a little politics, reminisced about polkaing during Badger games in the 80s, and then the show started. And it was weird. 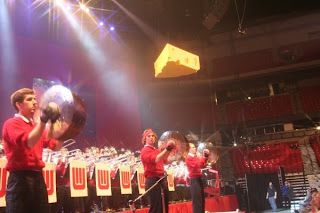 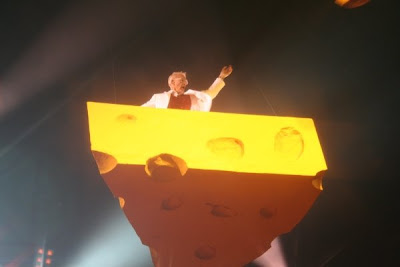 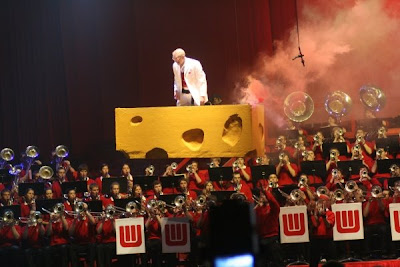 And then I laughed for about ten minutes, while the band played some rousing Wisconsin-type music. After that, Nat came out and wowed the audience with his solos (including his famous “Warrior Comes Out to Play” which made my dad start talking about Robert Bly until I shushed him and whispered, “LISTEN. MULTIPHONICS.”) 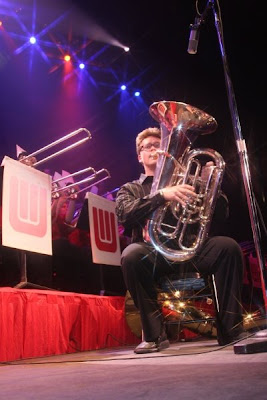 Also, he was broadcast on not one but THREE JUMBOTRONS, which I must admit was a little intimidating and I started wondering if he’d actually want to hang out with me after the show. I mean: Three. Jumbotrons. What do I have to offer someone like that, other than constant repetition of the joke “That’s what he said”? I comforted myself with the fact that I’ve known Nat since he was 16 or 17 and I could always hunt him down and loudly tell him about himself as a teenager if he tried to ditch me. 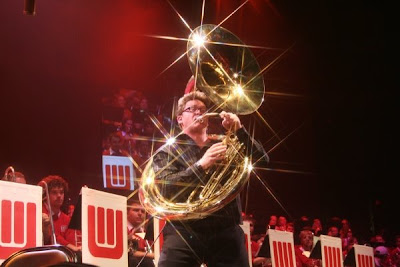 After Nat’s solo, the show got really weird. Weirder than flying cheesehead weird. I swear to god. 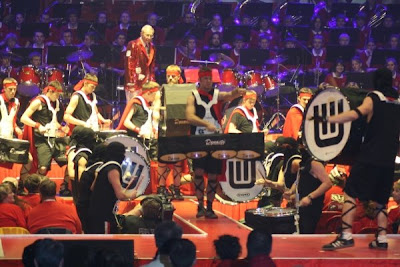 The drumline warriors came out and played percussion while fighting ninjas….. 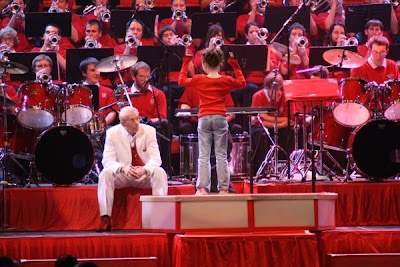 A small child took over the band for a while…. 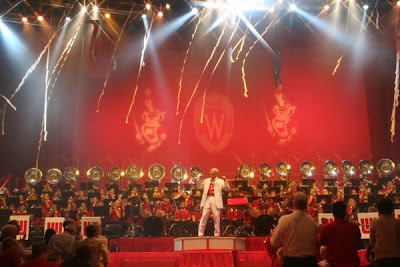 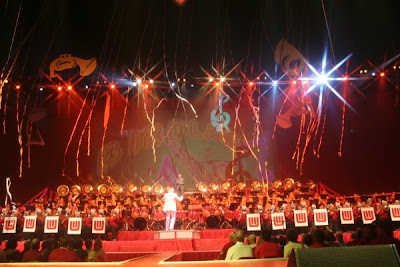 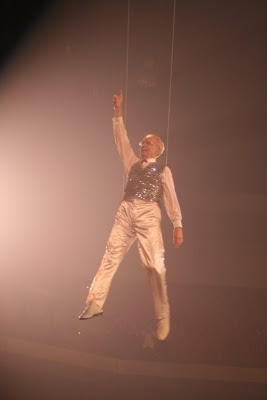 Mike Leckrone flew through the air. Did I mention the fact that he’s 71? 71. And he did flips. Wearing a sparkly sequined silver vest. 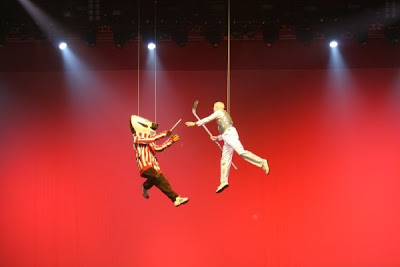 And then he did battle with Bucky Badger. In the air. 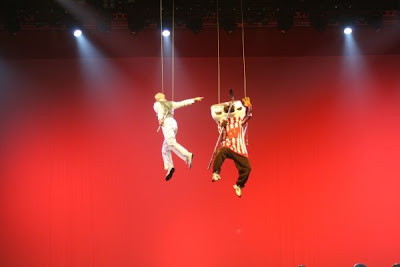 I am not even making this up. 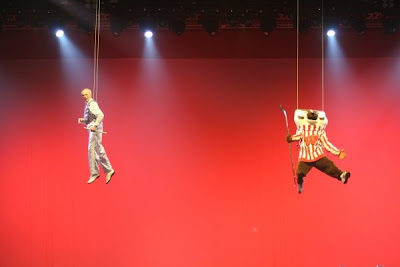 What this had to do with band music I don’t know. And really? I don’t care.

Because it was awesome. 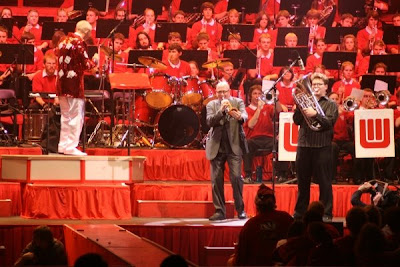 After the show, Mark Pender smooched me (on the cheek; I’m not a TOTAL jumbotron slut). This is my latest claim to fame. Next time you watch Conan and see him go crazy and run through the audience singing and screaming until Conan yells, “Pender! Pender! PENDER!!” just think: that dude smooched Molly. Yep. I was pretty excited about it until I learned that his nickname is “The Loveman.” All right.

Mark Pender: The Loveman. A man who loves… to smooch.

High School Friends on Jumbotron: Weird. Be ready to Blackmail.

My dad: Even though he’ll constantly interrupt you to ask your opinion on Obama, Clinton, and/or your sister’s new job, he’s still the best UW Band date there is.

Nat: Does multiphonics! On a SOUSAPHONE!

And also: a darn good BFF. Because after all, he was on three jumbotrons and got FOUR STANDING OVATIONS FROM AN AUDIENCE of 10,000, and still didn’t try to ditch me after the show. Now that’s a real friend.

You had me at "giant flying cheese wedge."


Now I know what it will take to make my life complete. Whew! That's a load off.