Pop Song Lyrics That Make Me Argue With the Radio

It's summer! Still! Which means it's time to listen to the pop station when I'm cruising sitting in horrible rush hour traffic on Lake Shore Drive and/or driving to Iowa every other weekend, which is how I've spend most of my summer. Pop music is great for making long drives seem shorter. It's also great for having insane lyrics. And, well, you know me: when I see or hear something too often, I start to pick it apart.

In this case, I find myself arguing back at the radio, which doesn't look crazy at all.

And because the voices in my head tend to quiet down when I share them, here are a few of the songs that are currently making me stop and argue whenever I hear them:

Song: One Direction - "What Makes You Beautiful"

Lyrics in question: "You don't know you're beautiful / that's what makes you beautiful"

Argument: This is a very charming idea, I suppose. The song WANTS you to think, "Hey, maybe I'm beautiful! And I don't even know it!" But look, just because someone doesn't know they're beautiful doesn't automatically make them beautiful. I bet Marla Hooch doesn't know she's beautiful. 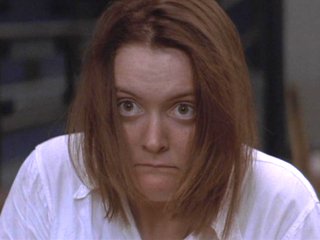 Is that what makes her beautiful?

Lyrics in question: "Jump in my hoopty hoopty hoop, I own that / I ain't payin' my rent this month, I owe that"

Argument: Honey, I get that you're trying to prove what a carefree badass you are, but look. Pay your rent. Just pay your rent. Otherwise, you're going to be living in your hoopty hoopty hoop, and there's nothing sexy about living out of a car.

Lyrics in question: "I'd catch a grenade for ya / Throw my hand on a blade for ya / I'd jump in front of a train for ya / Take a bullet straight through the brain"

Argument: Whoa. Settle down, pal. Maybe just buy me a beer or something, and we'll be good.

(My friend Christy asks, "What is the likelihood that someone would ever throw a grenade at you, and that, because of me, you would need to catch it?")

Lyrics in question: "Are we human, or are we dancer?"

Argument: Are we... dancer? That is not English, Brandon Flowers.

The funny thing about these lyrics is that apparently Brandon Flowers was really upset that people were so confused about them. "I really care what people think, but people don't seem to understand 'Human.' They think it's nonsense. But I was aching over those lyrics for a very long time to get them right." Well honeychild, maybe if you had spent less time aching and more time, you know, writing grammatically correct lyrics, more people would have understood what the hell you were trying to say.

Lyrics in question: "If I was your boyfriend, I'd never let you go"

Argument: You mean "If I were your boyfriend," kiddo. I know you've been living on a tour bus since you were a tiny baby, but that's no excuse not to learn your native language. Even Canadians use the subjunctive.

Lyrics in question: "When I put on a show / I feel the adrenaline moving through my veins / Spotlight on me and I'm ready to break / I'm like a performer, the dance floor is my stage"

Argument: That is not a simile, Britney. You got it right earlier in the song ("I'm like the ringmaster / I call the shots / I'm like a firecracker / I make it hot") -- you're not actually a ringmaster, nor a firecracker, so it makes sense to construct similes comparing yourself to them. But you're not "like a performer." You're actually a performer. Not a simile. The dance floor is actually your stage. It's not a metaphor.

Lyrics in question: "And now, the dudes are lining up cause they hear we got swagger / But we kick em to the curb unless they look like Mick Jagger"

Argument: First of all, Mick Jagger looks like an animated corpse. 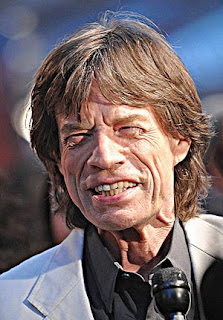 Really, Kesha? You kick anyone to the curb unless he looks like this guy?

Here's the thing. When Kesha was born in 1987, Mick Jagger was already 44 -- really, too old even to be her father. Let's say Kesha became aware of boys around age 12 -- Mick would have been 56, or old enough to get the senior citizens breakfast at Perkins. When "Tik Tok" was released in 2009, Mick Jagger was 66 years old. My dad is 66, and he mostly sits in his recliner all day. Not exactly who I want to go clubbing with. Though I do like to imagine Kesha on the dance floor, surrounded by an army of Zombie Mick Jaggers.

(My friend Michael argues that "The One True Mick Jagger is always 22 and unsatisfied." Fair enough, though in that case I would argue the lyric should go, "We kick them to the curb unless they look like Mick Jagger used to, twenty-two years before we were even born.")

Extra Credit: Wiz Khalifa's rap break, which begins with the line "Man, f*ck that sh*t." Sorry, Adam Levine, I know you're trying to sing this totally wistful song about payphones or whatever, but Wiz is having NONE OF IT.

Someone needs to hook their iPod up to the radio. Although I guess if not doing so leads to posts like this...

You made me cry-laugh. Thank you. Really, thank you!

Welcome back to the blogosphere. Funny post! I am way too old for One Direction, but I know all the words to the songs on the album because it's a good one to walk to. Upbeat, catchy.