One Billion Trillion Units(?) of Deliciousness

In other words, The Greatest Snack Food Stadium Ever Built: 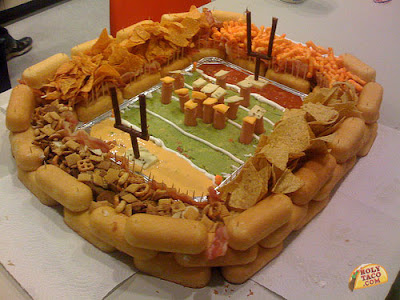 On a similar note, and in case you've been living in a Bacon Cave (or would it be a vegan cave? A bacon-hatin' cave? Anyway, you know what I mean), the internet's crazy for the Bacon explosion!! Almost as popular as that goddamn Snuggie.

Baby Got Good Grammar... Back

Sit back and allow Sistersalad to tell you a little something about grammar, with a little help from Sir Mix-a-Lot.
No comments:

Basil has a mast cell tumor on his right shoulder that will be removed & biopsied next week to see if it has metastasized. Poor Bazzy. It's been a tough year for Backes Dogs, and it's definitely too soon to go through another cancer dog grieving process. 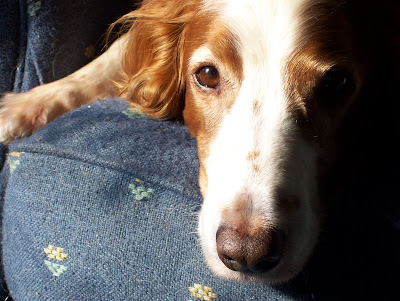 Plus, even though Aunt Basil is indeed a crabby old queen, though he's punched through two windows, left rabbit legs in Mom's purse, vomited a turtle in the back yard, and got cracked out on turkey and bit Natalie, mostly he's a nice freckle faced boy, and he's got a good number of years in him. We hope.

Actually, you know what, I take that back. The last time I rode a bike was in Madison, when I lived on Rodney Court, and it IS a better story, but one my attorneys have advised me not to share publicly. Buy me a beer and I’ll tell you sometime.

Also I used to ride on Lisa Otte’s tandem bike in college, but that mostly involved me putting my feet up and letting her pedal us both.

The point is, you’re supposed to be able to ride a bike forever once you’ve learned, but clearly the same isn’t true for blogging, because for the last six weeks I’ve had no idea what to write about. None. Though obviously telling stories about biking is a rich vein to mine.

So, last six weeks, in brief: My sister came to visit for Thanksgiving! and introduced me to the delight that is Hacker-Pschorr. I had to work the whole weekend, but she played with Natalie and then helped me move a podium to StoryStudio, where it is already much beloved. I made the rounds of the usual 10,000 holiday parties, missing only Kate’s birthday because I was sick (happy birthday, Kate!) but making it to Jere & Erin’s tree trimming party, Chris’s Festivus party, our own Annual Cookie Exchange Party (now with more 100% more Circles of Celebration!), StoryStudio’s holiday party, StoryStudio’s Open House, Dan & Kelly’s Christmas Eve LOTR marathon (straight after working xmas eve at the dogstore; I ate some turkey and promptly collapsed into a snoring heap in the papysan chair), and finally Natalie and Molly’s Quiet Christmas Morning Tiny Party, Guest-Starring Mamabackes. And in the middle of all those parties, I also managed to buy a few xmas presents (including some awesome art & a lobster shirt from Threadless, who live in the same building as StoryStudio and are pretty cool), dyed my hair black just because I always had a hunch I could pull it off, worked a million retail hours at the dogstore, bought myself a new sweater (it's blue!), managed to land a position as a poet-in-residence with the wonderful Hands On Stanzas program (and no, regardless of what my father may have told you, I am not the Poet Laureate of Chicago), got a promotion at StoryStudio (Assistant Director, woo!), and even read a few books.

And then the New Year came, and with it came the ebola. I lost a week of my life – one fifty-secondth of the new year – to a hideous death flu contracted from my mother, the birthday girl. It was ugly. Let’s not speak of it ever again, except in reference to “the sickest I’ve ever been,” and hopefully told only as legendary war story, as in, “You think this is bad? This is nothing compared to the 2009 Death Flu,” and NOT “wow, I’m even sicker now than I was with the Death Flu of 2009!”

Anyway, so this is exactly what I’ve been trying to avoid these last few weeks: you’re so good to come back to my mostly defunct blog, checking in on me to see if I have anything interesting to say to distract you from whatever boring task you’re trying to avoid, and all I can give you is a long list of randomness and then a story about barfing.

But since you've been such a good, diligent reader, and because you've been so kind to overlook my sloppy and excessively parenthetical blogging ways, instead of the very predictable, pedestrian conclusion-with-a-half-assed-promise-to-do-better-in-the-new-year, I offer a picture of the present I bought myself today. Because I’ve coveted it for months, and because it’s adorable. 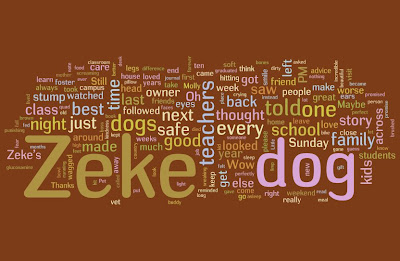 Given that my primary obsession from about 2000 to 2003 was the problem of making visual art out of words, how is it possible that I didn't know about Wordle? The site allows you to enter a web address, body of text, or del.icio.us user name, and from there generates a random word cloud based on the number of times certain words appear in the text. I used the text from Teacher's Pet to generate this one. (Click on the image to see a larger version.)
1 comment: